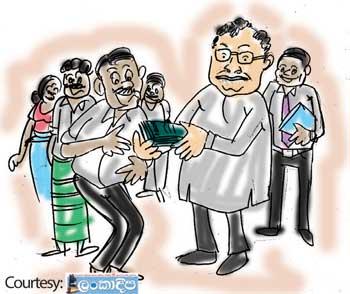 A prominent politico of a main political party planning to contest a seat at the coming general poll, has begun doling out Rs. 2 lakh each to party supporters to renovate their house roofs, they say.
Some people have obtained this free money comes as a godsend despite there being no need to repair or re-construct their house roofs.
However, this ‘financial assistance’ is being given only to the householders confirmed as the ‘genuine’ supporters of the party.  The data such as the number of voters of each household receiving the ‘roof repairs’ money is already being collected for a survey conducted to ascertain the party’s voter strength in the district,