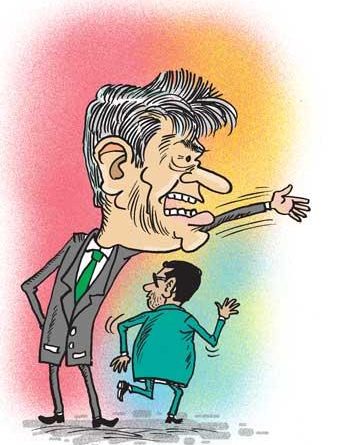 A get-together to express goodwill to Punchi Dasa was held the other day at the Colombo residence of a close relative of ‘a lion-like’ state purohita.

All Punchi Dasa loyalists had been invited to this bash. However, some of these loyalists had made it a point to quietly obtain permission from the Green leader before attending it.
Among those who had quietly met the boss to get his nod was a gabby Diyawanna politico having Colombo Central as his political base.
Greetings over, the politico told the boss: “Sir, there is a party this evening… and I too have been invited to it…I thought of attending it with your kind permission…”
“Attend it if you have been invited,” replied the leader. “But don’t put your signature on whatever documents handed to you…Convey this advice to your colleagues as well…”. He paused a moment and added: “Remember that I have already decided whom we should field at the big poll…!”
“Okay, Sir!” replied the politico and left the place with a song in
his heart.