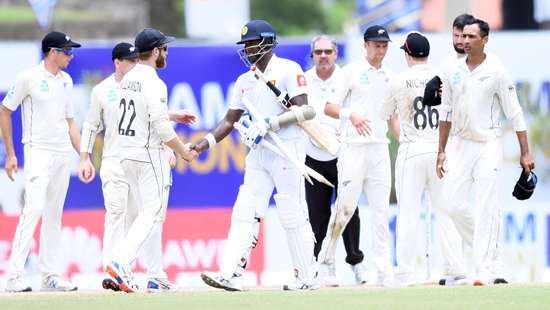 Dimuth Karunaratne’s ninth Test century set Sri Lanka on their way to a record-breaking six-wicket win against New Zealand at the Galle Stadium on Sunday, handing the hosts an unassailable lead in their first series in the Test World Championship.

It was the highest successful run chase at this venue, historically known to be one of the most challenging to bat last on, a fact reflected by the record it eclipsed – the 99-run target Sri Lanka chased down to beat Pakistan in 2014.

This result also extended Karunaratne’s perfect record as Test captain, winning all three matches he has led the team in.

The 60 points for Sunday’s win also puts Sri Lanka, momentarily at least, at the top of Test Championship Table ahead of Australia, the only other team to have accumulated points since the competition was inaugurated this month.

Karunaratne had never scored a fourth innings century and became just the third batsman to do so at this venue, an innings that was not completely chanceless but proved to be essential in seeing the hosts to victory.

He had done much of the work the previous day, resuming on an overnight score of 71, and continued on to ensure Sri Lanka were well within reach of victory when he was eventually dismissed on 122.

He struck two boundaries and a six – which took the total past 150 – inside the first half hour of play before tucking in and focusing on working the ball into either side of the field and, with his opening partner Lahiru Thirimanne, slowly ticking runs over.

That passage of play included a third reprieve for Karunaratne – he had been dropped twice on Saturday – as Tom Latham failed to get fingers under a low catch at short leg.

His next boundary came when, on 99, he charged Ajaz Patel and cleared the packed infield to bring up his century acknowledging the applause for a truly special innings.

Day five began with Sri Lanka in a strong position, having already scored almost half of the required runs over without the loss of a wicket.

New Zealand finally made a breakthrough when Thirimanne was given out leg before wicket to William Somerville, a decision the batsman chose to review to no success, ending a well composed innings of 64 which, for now, will allay questions about his place in this Test Team.

The 161-run opening partnership was the joint highest opening-wicket stand in Tests played between these two countries, a record solely held by New Zealand’s Trevor Franklin and John Wright for their effort in Hamilton in 1991.

Kusal Mendis came out all guns blazing sftriking a boundary and a six in the first four deliveries he faced but the approach blew up in his face when he failed to keep his sweep along the ground and was caught by Jeet Ravel at mid-wicket having faced further two deliveries.

Three watchful overs followed, after which Karunaratne and Angelo Mathews struck fours off Patel with Karunaratne’s next boundary taking Sri Lanka past 200.

The centurion was eventually dismissed by Tim Southee, chasing a ball well outside off-stump to be caught behind for 122, his team just 50 runs from victory.

Kusal Janith Perera then got off the mark with a swipe through extra cover, adding three more boundaries off the next two overs.

Sandwiched between those hits to the fence was a successful review by Perera, on 10, challenging the on-field Umpires decision to give him out caught off Somerville’s bowling.

His quick-fire innings ended at 23, when he was cramped for space attempting to clear mid-on, but he had put Sri Lanka within touching distance of victory.

Dhananjaya de Silva then struck three fours, inching Sri Lanka to within a run of victory, with Mathews confirming it with a single, high-fiving de Silva on the way to the non-striker’s end.