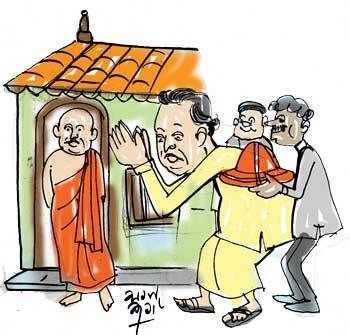 A former political high-up had reportedly made a request to several Buddhist prelates to use their influence with a very high political authority to secure for him a governing office by removing the incumbent already appointed.

Two ‘professional’ hangers-on also had accompanied the high office aspirant on his visits to the Buddhists prelates.

The two hangers-on had earlier called on the newly appointed governing one to fawn on him, but the latter had given them the cold shoulder.

The former political high-up now aspiring to a governing office is said to be a typical political turncoat.