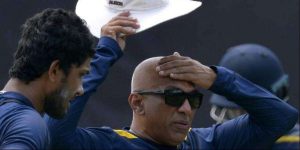 Former Sri Lanka fast bowling coach Rumesh Ratnayake has been appointed interim head coach of the national team for the forthcoming series against New Zeland. This was revealed by Sri Lanka Cricket President Shammi Silva at the pre-match press conference held in Colombo on Wednesday.
Sri Lanka play New Zealand in a two match Test series followed by three-match T20 series.
He replaces head coach Chandika Hathurusingha whose contract Sri Lanka Cricket has terminated following a directive from the Minister of Sports Harin Fernando.
Earlier SLC said Jerome Jayaratne, SLC’ Chief Operating Officer, will take over as Coach in the interim for the New Zealand series while the Board continues its hunt for Hathurusingha’s replacement.
Hathurusingha, who was hired in January 2018, completes his contract in December next year but inconsistent performance in white ball cricket forced SLC to demand his resignation on the instruction of the Sports Minister.
SLC had been in negotiations with him to amicably part ways since the conclusion of the World Cup but Hathurusingha has been adamant that they sack him if they wanted to and talks collapsed unpleasantly.
This will leave SLC facing a protracted legal battle as Hathurusingha has an ironclad contract.
In 2009, Hathurusingha was the Sri Lankan team’s “shadow coach” but was cold-shouldered by a controversial administration headed by DS de Silva despite a glowing recommendation made on his behalf by Kumar Sangakkara. With Sangakkara’s pleas failing to convince the Board, Hathurusingha left for Australia and then moved on to Bangladesh where he was coach from 2014 to December 2017. He could now return to his former employer, Bangladesh Cricket Board, on a fresh contract as they have shown interest in taking back.
Hathurusingha was long under scrutiny over the team’s slide in international cricket. It wasn’t that Sri Lanka had done better without him. It was that his arrival had not heralded the expected turnaround of fortunes.
It was not entirely his fault. The absence of a coherent and consistent policy in cricket administration saw players being picked and dropped more often than you change your underwear. Selectors were shuffled too often. There was just no continuity and consistency. And there were more captains and coaches than any other team has seen since the last World Cup.