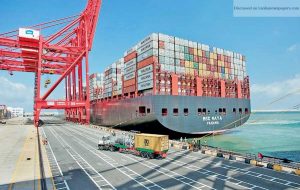 One of the most common complaints of businesses/entrepreneurs in Sri Lanka is policy inconsistency and ad hoc policy changes. From the changes in taxes to changes in interest rates, Sri Lankan businesses are often faced with challenging conditions.
When we examine the motives behind the need for frequent policy changes, the root cause appears to be the periodically weakening of country’s balance of payment (BOP). Hence, successive governments are forced to adopt policy shifts in line with the ‘IMF-prescribed formulas’ to remedy BOP crises situations. These measures, aimed at ‘slowing down’ economic activities or aggregate demand, unavoidably contradict the medium to long-term growth/development agenda of any elected government.
Since exports account for a smaller share of Sri Lanka’s gross domestic product (GDP) and Sri Lanka’s high import dependency, rapid expansion of economic activities (either as a result of the Keynesian-type stimulus or otherwise) often lead to the deterioration of BOP (as imports increase at much faster rate than exports). Hence, the policymakers are forced to take steps to shift the economy into a ‘low gear’. These ‘go-slow’ policy measures impact business in many ways – from the rising cost of capital to the slowdown in consumer demand.
And conditions get worse when the governments subsequently adopt additional fiscal measures to shore up state cash flows – fashionably termed as ‘adopting fiscal discipline’. The government finances usually deteriorate during ‘go-slow’ policy periods, resulting in the need to cut state spending and add more taxes, thus exerting further dampening effect on businesses. 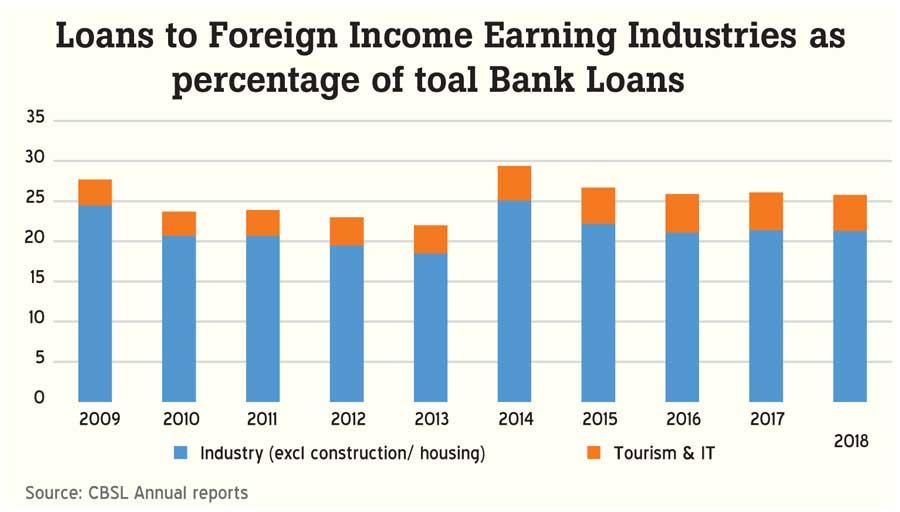 Need to boost exports
Sri Lanka’s economic problem appears to be rooted in its inability to sustain a healthy level of foreign inflows. Hence, whatever the agendas the governments formulate to develop the country, are futile unless definite action plans are in place to boost foreign inflow in the medium to long term – primarily through exports. Exports as a percentage of GDP have declined from 17 percent in 2009 to 13 percent in 2018.
Stagnant investment in foreign income earning sector
The slow growth in exports is reflected in a comparatively stagnant level of investment in the tradable sector. This is evident from bank credit trends. The total share of bank loan stock to industry (excluding construction and housing) is seen stagnant over the years and has even a declined. Notably, loans to tourism and IT industries have also not seen much change despite both these industries emerging as important foreign income generators.
Ideally, the share of loans to foreign income earning sectors should have increased overtime. It is not sure if the bank lending practices also encourage more loans to the non-tradable sector such as construction, at the expense of foreign income earning industries.
Weak FDI prospects
Sri Lanka’s attempts to attract foreign direct investments (FDIs) to boost exports have resulted in little success in recent years. The reality is that Sri Lanka is not an attractive destination for international FDIs – except for businesses that aim to make use of the geographic location.
Sri Lanka has barely attracted FDIs to the manufacturing industries, which form part of the supply chains to industries in other countries. Majority of FDIs coming to Sri Lanka are for non-tradable industries and Sri Lanka needs to be cautious of FDIs coming into non-export ventures as these FDIs could worsen Sri Lanka’s BOP problem in the medium to long term.
Moreover, the quantum of new money coming into the country in the form of FDIs has not been significant (majority of FDIs are anyway retained earnings of existing companies and not new funds coming into the country). For example, in 2018, when FDIs reached an all-time high of US $ 2.8 billion, the actual cash inflow in the form of FDIs (both equity and debt) was US $ 975 million (majority of which were for the acquisition of the Hambantota port by a Chinese firm).
Need to support export businesses
With waning investor interest to investment in the tradable sector and with low FDI prospects, the policy planners are left with very few policy alternatives but to develop local export industries. If we examine Sri Lanka’s own historical track record, we can see two successful industrial initiatives to boost foreign income. First was the accelerated 200 garment factory programme in the 1990s, which primarily focused on developing a new class of local entrepreneurs. This initiative laid a strong foundation to Sri Lanka’s readymade garments industry to reach where it is today.
Another accelerated and focused programme that has yielded good results is the development of the IT sector through various programmes in the late 1990s to early 2000s. This initiative helped the advancement on the IT/technology sector despite later losing steam due to lack of funding. However, now the IT/technology industry has achieved notable growth and has become a significant foreign income generator.
Hence, it is essential that the policy planners consider taking new and innovative initiatives/interventions to nurture and develop a new class of local entrepreneurs in the industries that have an export/foreign income potential. In doing so, it may be more productive to focus on new entrepreneurs in diverse and new industries.
Majority of Sri Lankan entrepreneurs also respond positively to ‘interventions’. Such export promotion programmes should focus on supporting businesses not only for a short period but also until they reach a critical size to compete internationally. Feasible programmes include export credit schemes, government-sponsored venture investment programmes, etc. It should also be noted that it is also important to closely monitor such businesses to ensure benefits afforded to them are not misused.
(Indika Hettiarachchi, a consultant in private equity, venture capital and project development, can be reached at indika.h@jupitercapitalpartners.com)