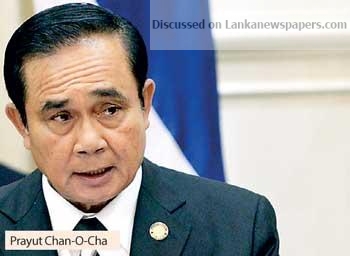 BANGKOK (AFP) – Southeast Asian leaders are eager to sign a sweeping China-led trade pact by the end of this year, Thailand’s Prime Minister said yesterday, with further talks expected at a Bangkok summit on the world’s biggest commercial deal.
Beijing is seeking to shape the rules of free trade across the Asia-Pacific, as America retreats from multilateral deals under US President Donald Trump.
The China-crafted Regional Comprehensive Economic Partnership (RCEP) includes all 10 economies of the Association of Southeast Asian Nations (ASEAN) who are meeting this weekend in the Thai capital.
But it also sweeps in China’s main regional rival India, as well Japan, South Korea, Australia and New Zealand, covering half the world’s population and around 40 percent of its trade.
Squabbles with India over access to its giant consumer market as well as Australia and New Zealand over the lack of ‘high quality’ labour and environmental standards have undercut talks in recent months.
Analysts say these competing priorities mean signing the deal any time soon may be unlikely.
But ASEAN, hosted this year by Thailand, is determined to hustle the pact through as tit-for-tat tariffs between the US and China tariff darken the outlook for global free trade.
“Thailand is trying to expedite the conclusion of the RCEP negotiations this year,” Prayut Chan-O-Cha, Thailand’s former junta leader who is now premier, told a business forum in Bangkok yesterday. “This is the agreed intention of all leaders.”
Seven of the 18 chapters within the deal have been “concluded”, according to the Philippines’ Trade Secretary Ramon Lopez.
“We have reached a point to really demand from different negotiating parties to be more realistic, pragmatic,” he said, adding the US-China spat should prompt ASEAN to “fast-track” the RCEP deal.
Shortly after taking office, Trump pulled out off an American-led Asia-Pacific trade pact called the TPP, preferring to leverage the power of the world’s largest economy bilaterally with Southeast Asian nations.
That opened the door for Beijing to champion free trade across the Asia-Pacific.
But the US is at pains to insist it has not abandoned the region and remains “very committed” to Southeast Asia, Peter Haymond, US Charge D’Affairs to Thailand said at the forum.