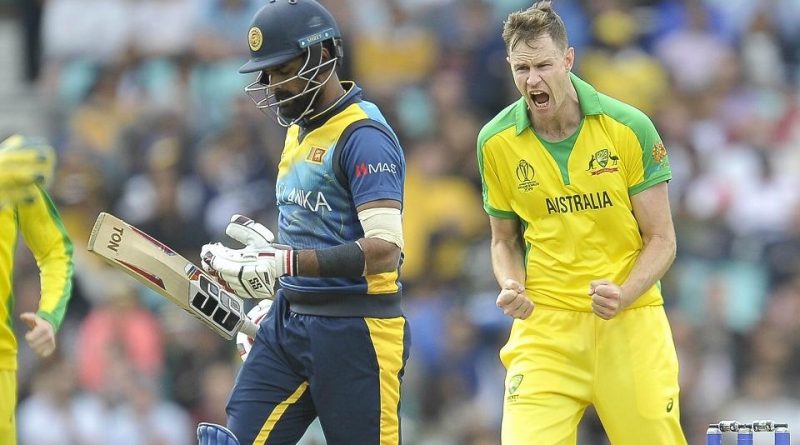 An 87-run defeat to Australia on Saturday leaves Sri Lanka with a tough task to earn a semi-final spot in the World Cup. It was a disappointing  blow to the islanders who squandered their chance of chasing a record target despite an excellent start by  openers Dimuth Karunaratne (97) and Kusal Janith Perera (52). They gave a blistering stand of 115 runs off 93 balls before a middle order collapse led them to a crushing defeat.
With just four wins out of five games, they must at least win three out of the four remaining encounters against—England, India, South Africa and West Indies.
“We just needed a good partnership after that terrific opening stand to win the match,” said Chairman of Selectors Asantha de Mel. “Unfortunately, our middle order collapsed once again.”
“Before the World Cup, our biggest concern were the openers but now we have found two solid openers who can give us the momentum at the top but we need our middle order to fire to win matches,” he said. “Angelo (Mathews), Kusal (Mendis), Thirimanne (Lahiru) all have the experience to handle such situations but they are very low in confidence right now. So if these three can click and strengthen the middle order, we can beat anyone.”
Mathews, a veteran of 207 ODIs has scores of 0, 0, 9 in three innings so far in the tournament, the worst out of the three. Mendis returned scores of 0,2,30. Thirimanne has scored 45 runs in the series. This will be major concern for Sri Lanka’s team management as they now prepare for their next game against tournament favourite, England.
“I think they need to take the responsibility and be little bit smarter in handling those situations,” de Mel stressed. “At 180 for 2 in the 30th over, we were very much in the game but we could not put the finishing touches. So we are hoping that our middle order will join the party at least in the next game.”
De Mel was also critical of Sri Lanka pathetic display in the field where runs were leaked at will by the fielders.
“Had we done better in the field, we would have at least cut down another 20 to 25 runs and then it would have been an easy chase on a good wicket,” he reflected. “But we were very sloppy in the field. Also, Nuwan Pradeep conceded far too many runs. All these contributed to the end results.”
Pradeep gave away 88 runs in his ten overs including 40 runs off his last two overs.
Meanwhile, Lasith Malinga has been allowed to return home to attend the almsgiving of his mother-in-law who passed away last week. He is expected to join the  team on Wednesday.