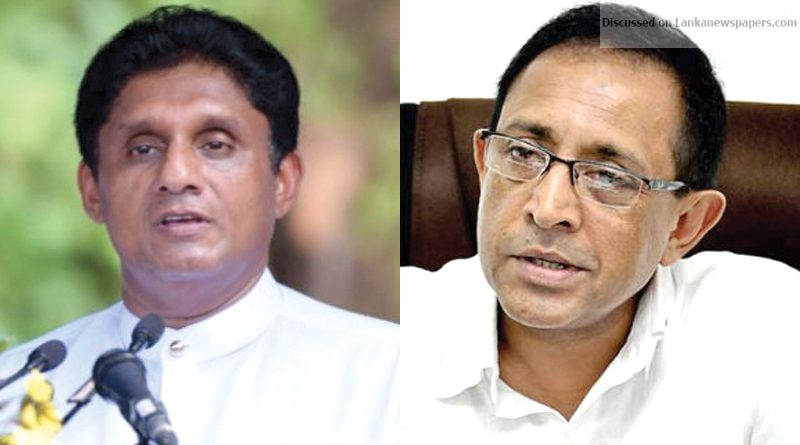 At a time when people in Sri Lanka see politicians as self-serving and power hungry, UNP Chairman Kabir Hashim has set an example to leaders across the political spectrum by sacrificing his Cabinet ministry in solidarity with the Muslim community, said UNP Deputy Leader, Minister Sajith Premadasa.
“I believe this act of courage by a senior Cabinet minister who has not been accused of extremism or any wrongdoing has set bar high for integrity and solidarity,” Minister Premadasa said, in a statement issued to the media.
“Seeing his Cabinet colleagues falling victim to hate speech and mob mentality, it was natural for a decent man and principled man like Kabir Hashim to stand up to xenophobia and stand firmly between his colleagues and those who preach hatred and division along ethnic and religious lines,” he said.
The UNP Deputy Leader said Hashim is a leader who has been elected several times by voters of all communities, whether Sinhalese or Tamil, and of all religions, Buddhists, Hindus and Christians, in the Kegalle district. Even in 2010, when only 60 UNP MPs were elected to Parliament, Kabir Hashim was one of those who held the confidence of his electorate and did the party proud.
“Yesterday’s protests in the Kegalle district calling upon Kabir Hashim to re-enter the Cabinet of Ministers and reclaim his portfolio demonstrates that the people still have confidence in him. Now, more than ever, this country needs experienced, educated professionals like Kabir Hashim to develop this country and unite our people across artificial cultural boundaries. As the Deputy Leader of the UNP, I believe the party too needs people of Kabir Hashim’s calibre to lead Sri Lanka into the future,” Minister Premadasa said.
“Now is not the time for people of his calibre to remain in the shadows. Now is the time for leaders to come forward, step up and play their part in charting the future of the UNP and the future of the country. I formally call upon Kabir Hashim to rejoin the Cabinet as soon as possible and take his place in our journey to chart a new political future for all Sri Lankans,” the UNP Deputy Leader said.