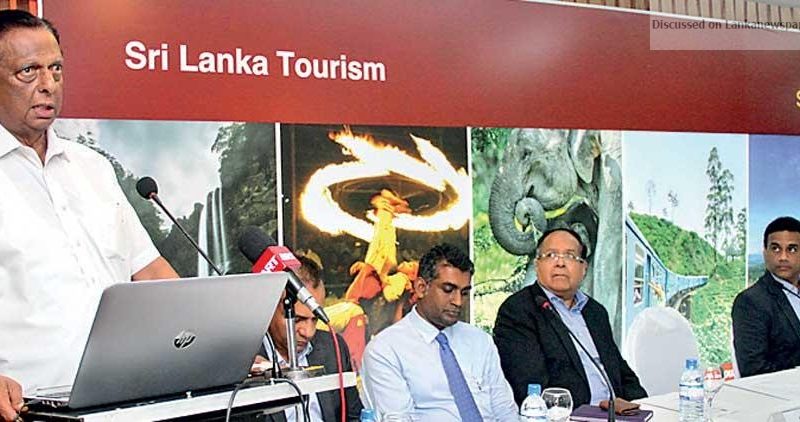 The stakeholders of the badly-hit tourism industry have come to one platform to help revive the market by offering nominal rates and putting together a special promotional campaign to attract travellers, starting with the Indian market.
With India being the largest source market for Sri Lanka’s tourism industry in recent years, the tourism authorities together with the stakeholders have decided to kick off the special campaign targeting that country, before making similar packages available for other markets.
Following the launch of the promotional campaign for the Indian market yesterday, authorities said similar packages would be conceptualised for China and a number of Middle Eastern countries in the weeks to come.
The promotional campaign, valid till September 30, 2019, is the first to be launched since the 21/4 terrorist attacks that negatively impacted the entire economy.
Initially targeted at Indian tourists, the package ranges from a combination of stays in destinations such as Colombo, Kandy, Nuwara Eliya, Dambulla, Sigiriya and the south coast, with an array of options to suit any budget.
Sri Lanka Convention Bureau Chairman Kumar de Silva shared with reporters yesterday that five packages with three hotel categories are made available, bringing the total to 15 tour package options.
Already in action from June 10, the packages are available for all of the 125 routes flown by SriLankan Airlines per week.
“The industry has provided rates, which are really very low and never before we have come down to this level to stimulate the Indian market. With this, we are hopeful to attract about 120 Indian tourists per day,” said de Silva.
According to Tourism Development, Wildlife and Christian Religious Affairs Minister John Amaratunga, if Sri Lanka can manage to get enough Indian tourists to visit, it is sufficient to keep the industry afloat.
“They are our neighbours and the leader in South Asia. If they keep travelling to Sri Lanka, it is enough; we need not depend on anyone else. How we could attract them, we need to work on however,” said the minister.
Sri Lanka Tourism Promotions Bureau Chairman Kishu Gomes said that with Sri Lanka having welcomed over 420,000 Indian tourists in 2018 and with outbound tourism in India growing at 7 percent year-on-year, compared to the global average of 4.5 percent, there is enough reasons to increase focus on the neighbouring giant.
As India is expected to have over 50 million outbound tourists by 2020, with an average tourist spending of US $ 876, Sri Lanka can focus on the market to reap better benefits in the near future, noted Gomes.

Tourism Development, Wildlife and Christian Religious Affairs Minister John Amaratunga yesterday urged the industry stakeholders to actively look at introducing activities to spice up the nightlife for tourists, so that more would be keen on visiting the country.
Pointing out that the common complaint, mostly from Indian authorities, is that there are not many entertainment activities to keep tourists occupied, Amaratunga stressed that this area requires increased attention.
“Our casinos are no doubt an attraction to many Indians but the complaint I get from the Indian authorities is that there isn’t enough entertainment in the city of Colombo. That is why more Indians go to Thailand, Malaysia and Indonesia, since younger people look for entertainment in the night,” said the minister.
“I have been telling the City Hotels Association that they should start their nightclubs. I don’t know why they are not doing it. No one is objecting it so they (hoteliers) need to be more serious about starting nightclubs,” he added.
Hotels in Sri Lanka operated nightclubs and bars up until a few years ago and halted operations after the government through a budget proposal imposed a levy of Rs.100,000 for every hour of bar operation.
Speaking to Mirror Business, City Hotels Association President M. Shanthikumar said that there are no issues in carrying out activities to promote night life other than the hefty fee imposed by the Excise Department.
“It became expensive for the hotels to continue as it was not commercially viable to pay Rs.100,000 every hour. This resulted in many hotels shutting down bar operations,” shared Shanthikumar.
The levy was imposed as a means to generate revenue for the government.
Shanthikumar said presentations have been made to the government to do away with the levy and such is expected to be scrapped in coming months.