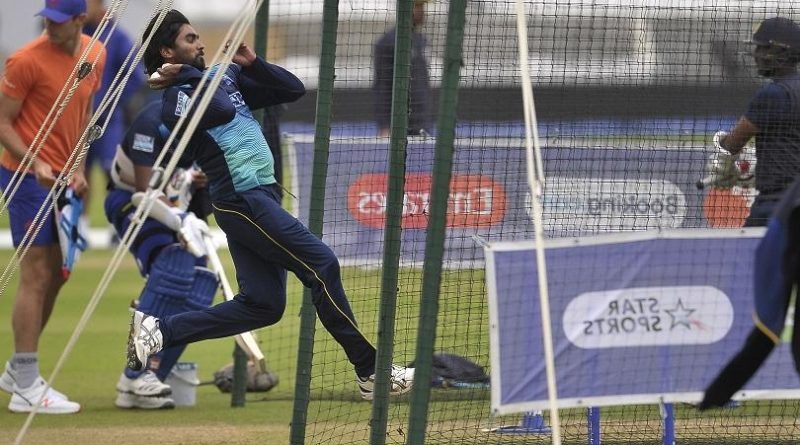 Sri Lanka face a nervous wait to discover if seamer Nuwan Pradeep will be fit to take the field on Saturday for their fifth World Cup fixture against Australia here at the Surrey County Cricket ground in England.
Pradeep, who led Sri Lanka to a fighting 34-run win over Afghanistan in her second World Cup tie last week, is recovering from a finger injury suffered during a training session ahead of the washed out Pakistan game in Bristol.
He was seen training on a raining Thursday morning at the Oval but whether or not the lanky right arm seamer would take the field will depend on his ability to play with an injured finger.
“We tested him with bowling and he seems all right but we need to make sure he can field as well,” said Chief Selector Asantha de Mel. “We will expose him to some fielding sessions today (June 14) before making a final call on whether or not to play him on Saturday.

Pradeep is one of the in-form seamers in the Sri Lankan side and his availability will be key a on a pace-friendly track. He picked up 4 for 31 against Afghanistan—a performance that helped Sri Lanka defend a modest 201.
“I don’t feel any difficulty in bowling,” said Pradeep after a training session. “There were couple of stitches on my little finger following the injury.”
However, Saturday’s clash will be another wet affair with chance of playing at just 40 per cent. Rains are expected to pour down on the city for most part of the day. This was frustrating to the Sri Lanka, whose last two matches were washed out without a ball being bowled.
“We were at the receiving end,” said de Mel. “Following our victory against Afghanistan, we were brimming with confidence but unfortunately both our matches (Bangladesh and Pakistan) were washed out. Unfortunately, the forecast isn’t great for the Australia game either.”
Commenting on the weather, batsman Angelo Mathews said that it was disappointing to lose out a few games to rain.
“Weather has not been great so far,” he averred. “But we cannot moan about it. It’s a big tournament. I understand the fact that it will get even longer if we had reserve days.”
The Oval has fond memories for the Lankans. They beat India at the Champions Trophy in 2017 but whether they can put on a repeat performance against the mighty Australians given the team’s current standing remains a question.
“There were so many fond memories in this venue,” Mathews said. “Especially the last win we had over India. It’s a fantastic feeling. But it’s a whole different game on Saturday. It’s a World Cup and it’s going to be challenging. We are up for it.”
The chief selector and Mathews are both optimistic about qualifying for the semi-final.
“We have got five games coming up and all against top teams,” Mathews said. “All these teams are very much even and they are a great challenge moving forward. We need to be on top of the game and a win here will be great. We will obviously take it one game at a time. A win here will stand us in good stead in our march towards the semi-final.”