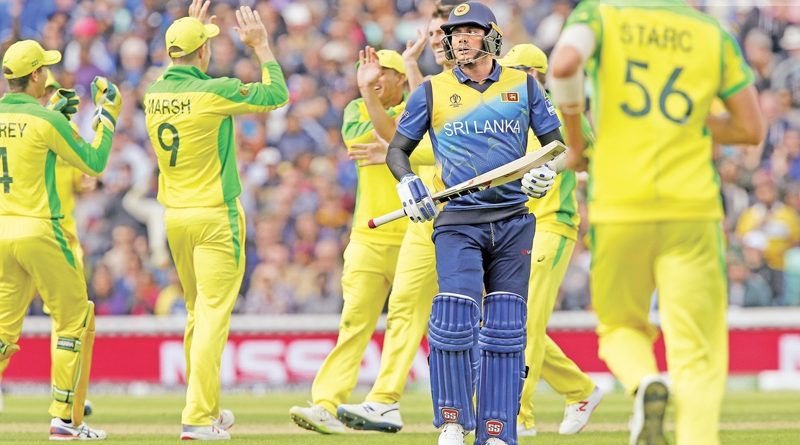 Angelo Mathews the second most capped Sri Lanka ODI player in the current team after Lasith Malinga has been having a dreadful run in the ongoing World Cup unable to reach double figures in any of his three innings played so far. He is dismissed for 9 against Australia at the Oval on Saturday. – AFP
LONDON, Sunday: Sri Lanka manager Ashantha de Mel has defended his players for not turning up for the official post-match press conference after their World Cup defeat against Australia at the Oval here on Saturday.
It is the norm at all ICC conducted tournaments for a player to be present for the pre and post match media conferences, but after Sri Lanka had thrown away a golden chance of beating world champs Australia no member of the team presented himself at the conference which reflected badly on the losing side.
“What can you do when no one wanted to go to the press conference? The players were so deflated after letting go off such a golden opportunity to post a win they were not prepared to go and face further questions and be humiliated,” said De Mel.
“We had some issues at Cardiff where the players were unhappy with certain questions thrown at them by the media writing the team off. They were not prepared to go and face them especially after today’s game,” he said.
Asked whether the ICC had written or spoken to him about the no-show, De Mel said they had not. “I am prepared to go and answer the questions myself but the request is for players whom we don’t want to further undermine their confidence when it is already low.”
Australia was represented by their captain Aaron Finch at the media conference.
Although Sri Lanka lost the contest by 87 runs, De Mel said that there were a lot of positives they got out of the match.
“We know we have a solid opening combination in Dimuth Karunaratne and Kusal Perera and our bowling at the death was also very good, but we have to improve our fielding and create chances because we are not a great bowling side,” said de Mel who is also the chairman of selectors.
“Our middle order batting is a big concern with Kusal Mendis and Angelo Mathews not firing. Our late order batsmen must also learn that they cannot hit a six off every ball against a good bowling attack. I have been telling them that they should learn how to defend as well but in the nets all they do is try to hit the leather off the ball from ball one which is not helping our cause,” he said.
CHANGE OF COLOUR IN CLOTHING
Sri Lanka has six days off before their next game which is against England at Headingley, Leeds on June 21 and, for which they will have to change their top coloured clothing.
“We have been asked to have less blue and more yellow in our shirts for the matches against India and England because these two countries also have a lot of blue in their playing kits,” said De Mel. Thus, for the matches against England and against India which is on July 6 at Leeds, the Sri Lankan players will wear a different coloured top with more yellow than blue than they have at present. The Lankan team left for Leeds yesterday where they will spend the next five days trying to rectify their mistakes learnt from the defeat against the Aussies.
Despite their loss Sri Lanka still retain fifth spot with four more games to play against England, South Africa, West Indies and India.
They need to win at least two of those matches to be realistically in with a chance of qualifying for a place in the semi-finals by finishing in the top four.