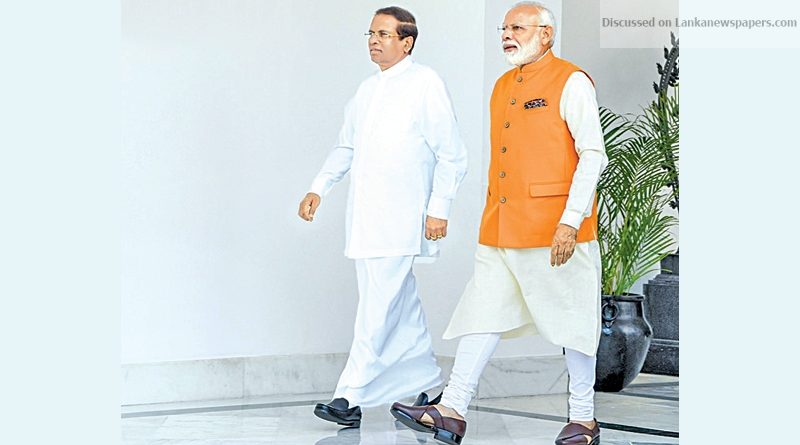 Re-elected Indian Prime Minister Narendra Modi will visit Sri Lanka on Sunday June 9, after making the first foreign visit of his second term to The Maldives on June 8 and 9, according to government sources.
Housing, Construction and Cultural Affairs Minister Sajith Premadasa will be the Minister-in-Attendance for the visit.
Modi’s brief one-day stopover in Colombo at the invitation of President Maithripala Sirisena reflects Delhi’s ‘neighbourhood first’ policy, officials pointed out.
The Indian PM is due to arrive in Sri Lanka on his return flight from Male at around mid-day on Sunday and he will be given a ceremonial welcome at the Presidewntial Secretariat before holding high level talks. Discussions are expected to explore the outlook for Indo-Sri Lanka relations in the second term of Modi’s BJP government now greatly strengthened by its enhanced parliamentary majority.
According to Foreign Ministry sources, the Indian PM’s formal itinerary is yet being finalised.
Analysts here expect the Indian PM’s visit to be a signal of Delhi’s affirmation of solidarity with Sri Lanka in the aftermath of the terror attack in April. Talks are likely to include the exploration of further collaboration in counter-terror action, these sources said.
Indian news media has noted that Modi had not visited The Maldives during his first term as PM, partly due to a downturn in Delhi’s ties with the previous regime in Male. At the same time Delhi places emphasis on its deepening ties with countries in the BIMSTEC grouping (Bay of Bengal
Initiative for Multi-Sectoral Technical and Economic Cooperation) to which Sri Lanka also belongs, analysts said.