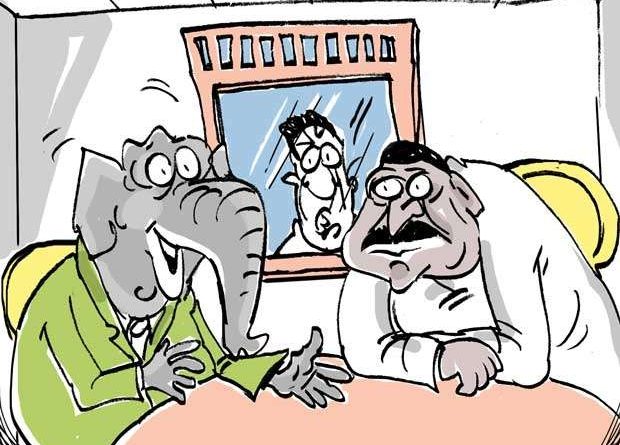 A Green party bigwig from the city recently called on a prominent party leader in the upcountry estate sector and invited him to throw in his lot with the Greens. By the way, the duo, classmates, are long-standing pals.

Assured of a place in the top team, the estate sector politico readily agreed to join the Green-led front adding a new demand: that his son be provided with a slot on the national list of the Green-led front.
The news about the agreement reached at this meeting soon reached the ear of the upcountry Man’s arch-rival ‘Diga’ who angrily warned the Green leader that his party with its six Diyawanna members would quit the Green-led front if they decided to have any truck with the upcountry Man or his party.
A highly perturbed Green leader had later pulled up the party’s city heavyweight for entering negotiations with the upcountry Man’s party behind his back.   It was yet another white elephant!
A certain purohita planned to hold a grand tamasha to promote the country’s agricultural sector at a leading conference hall in Colombo.
The purohita got adequate funds released for the grand event in the nick of time before the regime change.
This two day-grand event, a fancy of the purohita, which had cost a whopping Rs. 120 million had brought no benefit whatsoever to the farming community, say the white-collar high-ups who had to organize it.
“It was just another white elephant like the building the Ministry took on rent,” one of them quipped.