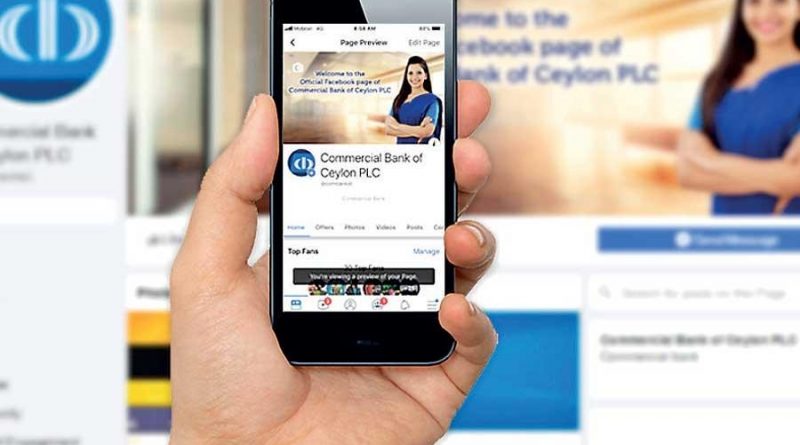 The Commercial Bank of Ceylon has been adjudged the ‘Social Media Brand of the Year 2019’ for the second consecutive year at the 8th Global Customer Engagement Forum & Awards in Mumbai, sharing the honour with joint Gold winner Switzerland Tourism.
The ‘Grand Prix’ award presented by the Asian Customer Engagement Forum (ACEF) recognises the Bank’s effective, innovative and refreshing use of five leading social media platforms to engage with and motivate target audiences in the preceding year.
Commercial Bank has carved a unique position for itselfin the social media arena by reaching out toyounger audiences with inspirational concepts and a fresh and distinctive look and feel on Facebook, Viber Public Chat, Instagram, YouTube and LinkedIn.
The bank provides an opportunity for fans to interact with it and engages with them by providing relevant, useful and motivational information that reflects a feel of humanity and nation-mindedness and is intended to create a new social media culture together with a strong emotional lock-in with the youth segment in Sri Lanka.
The success of this approach is demonstrated by Commercial Bank’s Facebook Page achieving the highest organic engagement ratios for a Bank
in Sri Lanka.
“We consider each and every engagement with a customer or a potential customer special, be it face-to-face, online or via social media,” Commercial Bank Deputy General Manager Marketing Hasrath Munasinghe said.
“As a bank that is fully-invested in the present and the future of Sri Lanka, we are committed to every demographic we serve, and the youth is accorded high priority. This recognition of the success of our social media strategy therefore gives us a great deal of satisfaction.”
Commercial Bank conducted more than 20 distinctive social media campaigns in the year assessed for the award, principally on Facebook and YouTube. Among the colourful campaigns that generated high engagement were the bank’s campaigns titled Let’s build a beautiful Sri Lanka;Let’s build a Green Sri Lanka;We are so Sri Lankan; Nation Mindedness; We are proud Sri Lankans; Beautiful Sri Lanka/The Cricket Paradise; Week of Humanity; Week of True Love;Sinhala and Hindu New Year; Wesak Dhammapada; Mother’s Day; Father’s Day; Women’s Day; Children’s Day; Dotcom FIFA Challenge;Back to the 90’s – Celebrating Sri Lankan Childhoods;Thrift Day;Christmas;and Admiring Art, Nature, Traditions and Culture as well as a series of advisory posts.
Activations, campaigns and posts of this nature resulted in Commercial Bank’s Facebook page recording impressive statistics in 2018. This included 41.6 million plus impressions, almost three and a half times more than in 2016, more than 1.4 million likes/reactions, a five-fold increase over just two years and more than 338,000 page likes, triple the figure for 2016. Shares per post have also tripled over the past two years, the bank disclosed.
The bank’s Viber Public Account launched in February 2017 had 88,000 followers at the end of 2018, the highest number of followers across the Viber Public Accounts of all banks in the country. The official YouTube channel of the bank had recorded a watch time of 339.9Kminutes as of 31st December 2018. The bank’s LinkedIn page launched on January 2018 and acquired 16,000 plus followers becoming the largest base ofLinkedIn followers in the financial services sector in Sri Lanka at the end
of the year.
The only Sri Lankan Bank to be ranked among the world’s top 1000 banks for eight years consecutively, Commercial Bank operates a network of 266 branches and 830 ATMs in Sri Lanka. The Bank has won multiple international and local awards in 2016 and 2017 and over 40 international and local awards in 2018.
Commercial Bank’s overseas operations encompass Bangladesh, where the bank operates 19 outlets; Myanmar, where it has a Representative Office in Yangon and a Microfinance company in Nay PyiTaw; and the Maldives, where the Bank has a fully-fledged Tier I Bank with a majority stake.