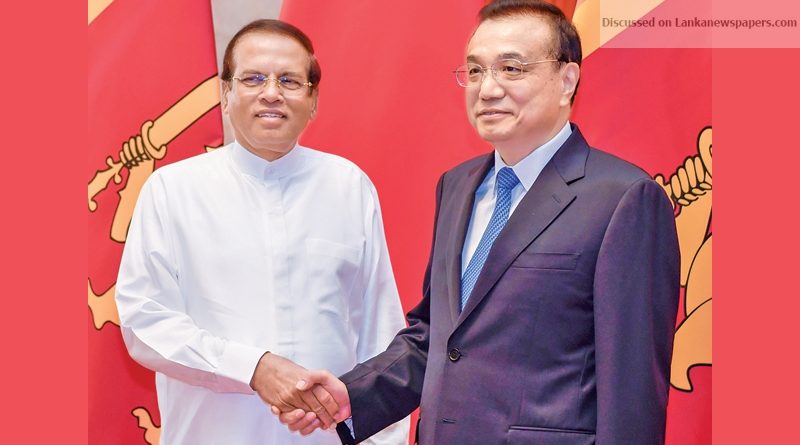 President Maithripala Sirisena addressing the Conference on Dialogue of Asian Civilizations held in Bejing, China yesterday said it is important for nations to work in tandem in the face of terrorism.
“During various turbulence, conflicts and riots which exist at present and the attempts to impose by suppressing others, it is important we recognize and discuss the cultures, identity, civilization and the nationalities of everyone. Based on the information we receive and the evidence we see, it is very important that we as Asian countries strengthen our bonds,” he told the audience.
“I believe that it is important to work cooperatively among the nations while facing the terrorism which has been sprung by international terrorism, and religious extremism, in order to live in a peaceful and democratic society, while protecting the identity and dignity of peaceful countries. I see the imperative need to defeat the terrorist groups and religion extremism and all the nations live in friendship and peace.”
At the conference he thanked Chinese President Xi Jinping and the Chinese government for providing him the opportunity to take part in this dialogue. “It is a policy and a concept accepted by all of us that no civilization can be suppressed by any other civilization. At a time when the subject of different civilizations of the world and different cultural identities are discussed and debated, as the leader of Sri Lanka, I participate in the Conference on dialogue of Asian civilizations to raise the question whether the Sri Lankan civilization and Sri Lankan identity could be suppressed by another invisible civilization.”
He said that Sri Lanka was at the time enjoying freedom and peace without posing a threat to any nation, culture or civilization when it was struck by multiple terror attacks on April 21. “We are still in fear and horror and especially in uncertainty over this unexpected situation.” He said.
He referred to the many ethnicities that call Sri Lanka home adding that he firmly believes that when an unknown forces not visible poses a challenge to civilization or culture, we should join hands to meet this challenge.
“One this one should consider is whether our unique cultures and civilizations in diverse global philosophies could allowed to be destroyed. Hence, it is very important the guidance and example provided by a country like China with a great civilization at this important Conference,” he said. “I must mention that in order to strengthen the unity, alliance and the friendship between the nations it is essential to recognize the unique civilizations and the cultures of other nations.”
He further said that discussion forms like the civilization dialogue was needed to ensure our identity, nationality, and the dignity of all of us by strengthening the bonds among us.
I believe that it is very important to formulate such a programme by this gathering of Asian Countries.