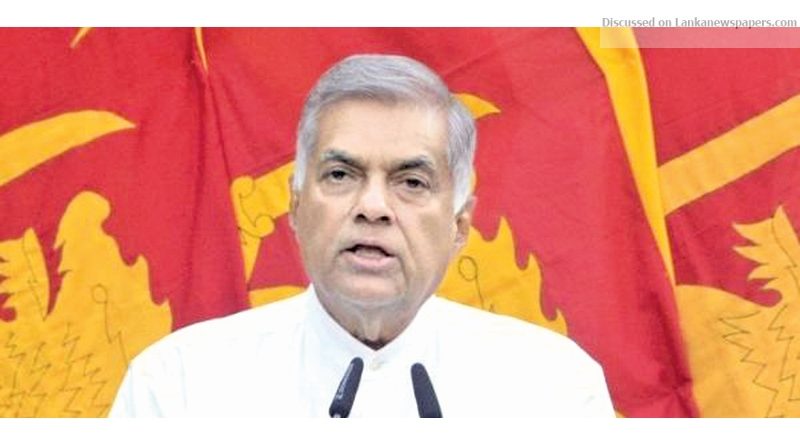 All terrorists involved in the Easter Sunday terror attack have either been killed or apprehended by now, Prime Minister Ranil Wickremesinghe said in Parliament yesterday.
“Now all that is left is to investigate those who had associated closely with the terrorists and those who aided them.Irrespective of their positions, all those who had aided and abetted these terrorists would be brought before the law,” he said.
“What is remaining to be done is only to investigate those who had aided and abetted the terrorists to carry out the Easter Sunday carnage and to institute legal action against them. We would not let any interference or would not consider status or position of anyone when taking legal action against the Easter Sunday terrorists,” he said.
Participating in the two-day debate on the current security situation in the country in Parliament yesterday, Prime Minister Wickremesinghe said Sri Lanka will never be safe from international terrorism.
He said that Sri Lanka must work with the international community to face the global threat of terrorism, noting that Sri Lanka needs sophisticated technology to face the threat posed by global terror networks.
Wickremesinghe said governments since 2014 had information with regard to the Sri Lankan nationals who had gone to Syria to join the IS organization. “After the leader of the IS Abu Bakkar Al-Baghdadi declared the Islamic State on June 29, 2014, many Muslims world over migrated to Syria and Iraq to pledge their allegiance to the terror group. Among those who went there were some Sri Lankans as well. There were intelligence reports that Lankans Mohamd Mushin Ishak Ahmed, Mohamed Unasin Mohamed Ameen and Mohamed Suvahir Mohamed Aruz went to Syria via Turkey to join the IS. There were intelligence reports in 2014 that some Lankans had been to Syria and had undergone armed training prior to returning home,” he said.
The Prime Minister noted that the security forces had satisfactorily completed the security operations throughout the country and brought the situation under control. He also noted that the government had compensated majority of victims of the Easter Sunday attack. “We have paid compensation to all those who had been killed in Katuwapitiya, Batticaloa and Kochcikade churches.The churches are now being renovated by the Navy and the Army,” he said.