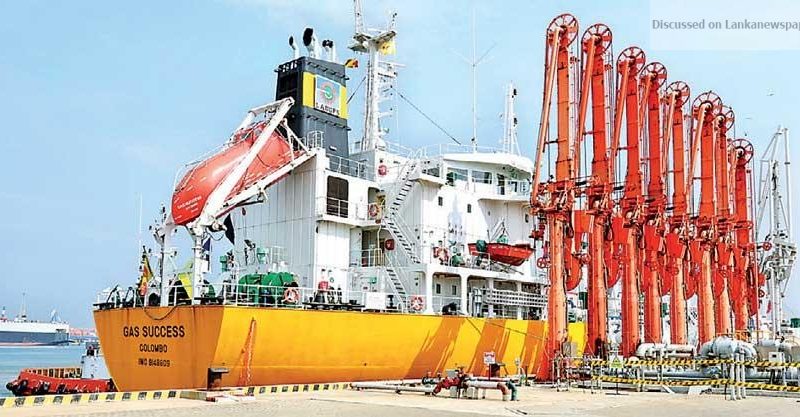 Laugfs Terminals Ltd officially inaugurated the operations of its state-of-the-art LPG transhipment terminal at the Hambantota International Port, the largest of its kind in South Asia, with the first of its LPG cargo brought in by the Sri Lankan-flagged vessel Gas Success, part of Laugfs Maritime’s own LPG vessel fleet.
The new Laugfs LPG Terminal is an important energy infrastructure in the Indian Ocean, having strategically located amidst key international maritime trading routes connecting west to east.
The first LPG cargo discharge on board Laugfs Maritime’s LPG ship, Gas Success, was ceremoniously initiated by Laugfs Chairman W.K.H. Wegapitiya, Laugfs Group Managing Director Thilak De Silva and Hambantota National Port Group CEO Ray Ren, with the presence of Hambantota International Port Service Co. Ltd CEO Captain Ravi Jayawickrama, Laugfs Maritime Director/CEO Dr. Leslie Hemachandra, Laugfs Terminals Director/CEO Ananda Premachandra and General Manager Heshan De Silva.
“This marks a historic occasion not just for Laugfs but for our nation as well as the entire Asian region,” commented Wegapitiya.
“The first revolutionary step taken towards realising Sri Lanka’s vision to become a maritime and logistics hub in South Asia was propelled in the early 1970s by the ground-breaking initiatives taken at the Colombo Port to create a hub for container transhipment.
What we are initiating today with the Laugfs LPG transhipment terminal will be a trigger for the second such revolution in fulfilling this ambitious vision of our country by creating an energy hub surrounding the Hambantota International Port.
The economic and social impact of this to Sri Lanka is tremendous and multi-fold,” he added.
With a projected annual export value of US $ 500 million, the 30,000 MT LPG terminal represents a significant investment in infrastructure development in Sri Lanka.
The new LPG Transhipment facility will also serve to initiate coastal shipping services between Hambantota and Colombo ports for the first time in the country.
The Laugfs terminal operations are expected to create and support many direct and indirect industries surrounding its activities, generating employment and income generation opportunities for the country.
“Over the past two decades, Laugfs has been able to stride ahead with true entrepreneurial vision as a world-class Sri Lankan conglomerate that could proudly etch the Sri Lankan flag on the global map,” remarked Laugfs Group Managing Director Thilak De Silva.
Strategically located in close proximity to some of the largest emerging LPG markets and key international trading ports in the region, the Laugfs LPG transhipment terminal will garner multiple benefits to the regional LPG players, elevating its significance as a central LPG hub in South Asia.
With tremendous opportunities to support the regional growth of the LPG industry, plans are also underway for the capacity to be extended to 45,000MT by the completion of the second phase of the project, marking a total project investment of US $ 85 million.
The new Laugfs LPG terminal will operate as a central hub for LPG importing, re-exporting as well as provisioning to retailers.
The terminal is also expected to support Laugfs Gas’ rapid expansion plans in the region to become an integrated regional LPG player in the Indian Ocean Rim area by leveraging on the synergies and strengths within its energy value chain.
Over the years, Laugfs’ energy presence has rapidly expanded across the region in line with the Sri Lankan government’s keen interest in the sector.
Laugfs’ presence in the sector ranges from LPG downstream activities in Sri Lanka and Bangladesh by Laugfs Gas, to LPG ocean freight services and related logistics with its own fleet of LPG vessels by Laugfs Maritime and energy trading by Dubai-based SLOGAL Energy DMCC.
Laugfs has continued to build its stake in the energy value chain with strong investments in energy infrastructure and the Laugfs transshipment terminal at Hambantota will be an important addition to this journey.