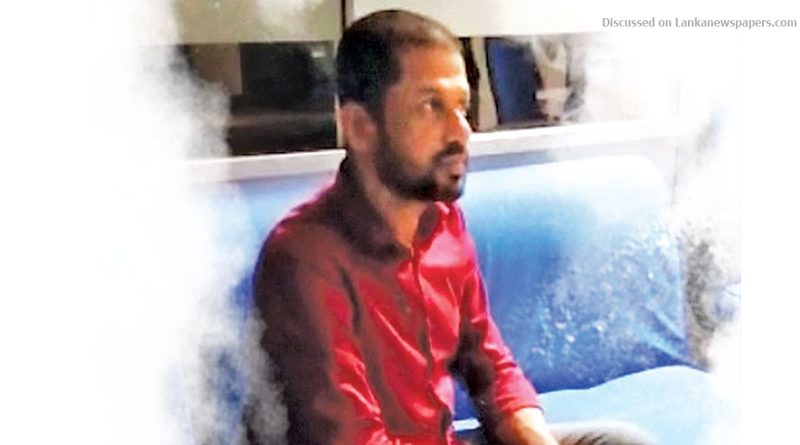 Headlines
May 6, 2019 Lankanewspapers 0 Comments
Makandure Madhush, an organised criminal considered the god father of the Sri Lanka underworld detained by Dubai Police was brought down from Dubai to Sri Lanka by a special Police team yesterday.
Informed sources said the special Police team which left for Dubai last week arrested Makandure Madhush who was in Dubai Police custody and brought him down to Sri Lanka.

The Police team included two ASPs and an Inspector from the STF.
They had made preparations to bring down Madhush last Friday.
“It is true that our Police team was in Dubai. What we did was to have a surveillance on Madhush while in Dubai. It was the Dubai Police which brought Madhush to the Dubai airport to deport him. We too came to Sri Lanka in the same aircraft. We categorically state that we took charge of him only at the Bandaranaike International Airport.
Thereafter we were responsible for him,” said a high ranking official of the CID on inquiry.
Sources said Makandure Madhush had been handed over to the Sri Lanka Police team after labelling him as a criminal deported from Dubai. They had also taken his finger prints and entered them into the Dubai security system to prevent him from entering Dubai or the UAE in particular again.
Madhush had been deported with the forged passport he had prepared under the name of Ajith Eranga Warnakulasuriya who is a resident of Gampaha. In 2015, Madhush had fled to Dubai by using this forged passport.
Makandure Madhush was brought to Sri Lanka by the UL 226 plane from Dubai which touched down at the Katunayake Airport at 5 a.m yesterday. He was brought down through a secret operation formulated by a high level Police team led by CID chief DIG Ravi Seneviratne and Senior SP Shani Abeysekara.
After airport formalities which lasted for about 15 minutes, the CID had taken steps to bring down Madhush to Colombo. He was brought from the airport premises in a van with tinted glasses with the STF providing security in a defender jeep and taken to the fourth floor of the CID building.

It is reported that Makandure Madhush had broken down at the CID headquarters begging CID officials to spare his life without killing him. He had said that he was willing to give all information to the CID about the identities of his close associates and details of his arms and ammunition dumps.
Makandure Madhush was dressed in the identical pink shirt with shades of red he was seen in the Dubai hotel party when he was brought down to Sri Lanka. Madhush’s mistress in Dubai Dilini Ishara had been unaware that Madhush was being deported to Sri Lanka.
On interrogation, Makandure Madhush had denied that he requested him to be released or asked any one to file a writ petition in the Dubai Court to prevent his deportation to Sri Lanka. He had said he was unaware of the person who had filed the petition. He has said after this petition was filed he was shifted to another location in Dubai and imprisoned in a dark room incognito without allowing any visitors to see him.
Prior to that he had all facilities at the place he was detained with even a telephone and allowed to take calls under Dubai Police supervision, even to Sri Lanka. He had said he had to languish in the dark cell for more than 20 days.

When Makandure Madhush and Kanjipani Imran were arrested by Dubai police they had also taken several mobile phones found in their houses into custody. Those phones have all details about their associates in the drug network and their links in Sri Lanka. Informed sources said the special Police team which brought Madhush had also brought these mobile phones with them.
The Dubai police had agreed to assist the Sri Lanka police team in analysing details found in these mobile phones.
President Maithripala Sirisena had made a special request to the UAE President Sheik Kalifa Bin Said Al Nayan asking him to hand over Makandure Madhush to Sri Lanka. This request along with a document detailing the criminal charges against Madhush was handed over to the UAEs State Minister Dr. Anver Bin Mohamed Garfash by a special Sri Lanka delegation led by Foreign Affairs Minister Tilak Marapana which met him on March 3. The delegation also included Acting Attorney General Dappula de Livera and SP Ranjith Wedasinghe, while in Dubai Makandure Madhush had issued death threats to several police officers conducting investigations against him. It is reported that Madhush had close links with several local politicians.
It is suspected that some of these politicians would have been behind the writ petition filed in Dubai to thwart Madhush’s deportation.

Makandure Madhush is the main accused in the murder of former Southern Development Authority Chairman Danny Hittetiyage on Poson Poya day in 2006. The Interpol had issued a red notice for his arrest in connection with this murder case. The case is now being heard in the Matara High Court. Madhush was detained in the Magazine Prison during the time of this murder. Investigations have revealed that Madhush had been involved in this murder by giving a contract for Rs. 350,000 to another person to assassinate Hittetiyage. Makandure Madhush is also a suspect in the murder of Wijetunga Gamage Upananda, a brother-in-law of Hittetiyage at Mawarala on July 17 2014. The murder had been committed over a land dispute. The murder of Hittetiyage had been an extension of this land dispute.
Makandure Madhush who was arrested with several other accomplices and firearms in June 2005 following an investigation into several robberies at a number of financial and leasing frauds on June 2005 was detained at the Magazine Prison.
His young brother was abducted by an armed group in a white van and shot dead and his body dumped on the Matara Bund in 2009. Madhush was thereafter accused of planning with the LTTE to assassinate former President Mahinda Rajapaksa and former Defence Secretary Gotabhaya Rajapaksa.
During the investigation into this alleged plot he was handed over to the Terrorist Investigation Unit by court order and detained for nearly one and a half years. He was later discharged of murder charges.
Madhush fled to Dubai in 2014 after he was granted bail by court. Notorious criminal Sothhi Upali’s sister Singithi had been the guarantor in 9 bail applications made in his favour.
Makandure Madhush’s name is also linked to an alleged conspiracy to assassinate President Maithripala Sirisena and former Defence Secretary Gotabaya Rajapaksa. The alleged plot had been divulged by a person named Namal Kumara. The CID investigating the alleged plot has arrested former head of the Terrorist Investigation Unit Nalaka Silva who is still in remand custody.
There are several criminal charges pending against Madhush including the attack on a prison bus at Kalutara, attempted murder of Inspector Neomal Rangajeewa and the murder of two others by shooting, murder of ‘Kos Malli’ whose head was left near the Hulftsdorp Courts Complex and the robbery of a diamond valued at Rs. 7,000 million.
Apart from this more than 50 killings had been committed with the knowledge of Madhush according to information gathered by Police.
In 2005 CID officers brought down two leading drug racketeers named Wele Suda and Mohammed Siddick who were held in Pakistan in the same manner as Madhush by visiting Pakistan.