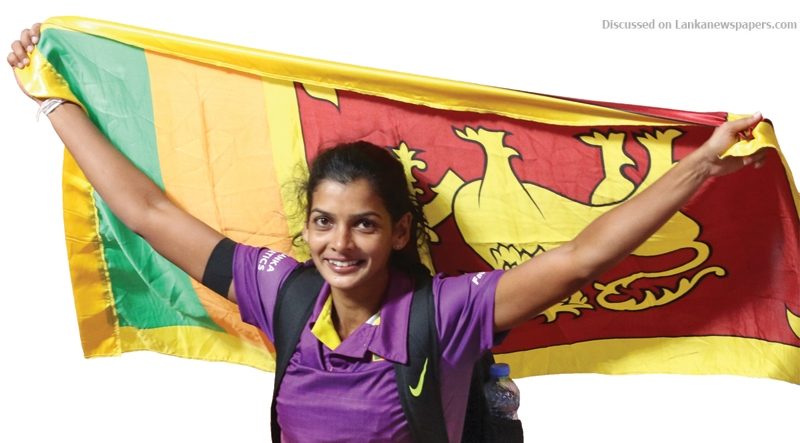 Vidusha Lassani won a Bronze medal for Sri Lanka in the triple jump at the Asian Athletics Championships in Doha Qatar Kalifah Stadium yesterday.
Vidusha cleared a distance of 13.33 meters to win the only medal for her country on the third day of the four-day event.
In the women’s 3000m Steeplechase Nilani Ratnayake was unlucky not to win a medal finishing fourth. In the final fifty meters she struggled to keep her balance and fell back as she tried desperately to overtake her opponents.
Nilani surpassed several other runners in the final 200 meters as they increased the speed coming to the final stretch when she lost control.
The winner of the gold was Mutil Winfried from Bahrain (9:46.18) with the silver going to Sheng Shi (9:51.78) from China, and the bronze to Tiger McConnor (9:53.96). Nilani, who finished fourth was clocked at 9:58.55.
A sad Nilani said after the race: “Third place Bahrain runner attempted to block me from progressing forward when she struck me with her hand that saw me lose control of myself”.
“I spoke with the team officials and lodged a complaint.”
Meanwhile, Janaka Wimalasiri with a distance of 7.75 meters and Danushka Sandaru with 7.53 meters have qualified for today’s final round of the men’s long jump event.
Himasha Ashan, who was hoping to take part in the 200-meter qualifying round last morning pulled out of the race.