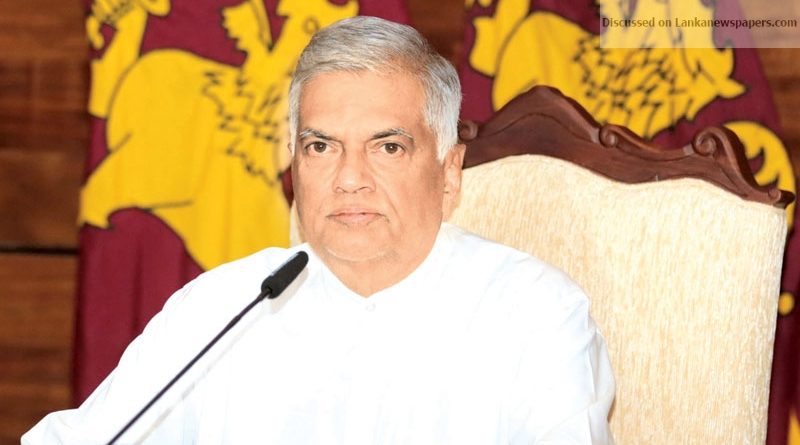 Prime Minister Ranil Wickremesinghe in a special statement at Temple Trees said proper attention of security forces should have been drawn to the information received about a probable terror attack.
He said that it has been revealed that intelligence units had informed relevant authorities about a probable terror attack. But necessary attention had not been drawn to that information.
The Prime Minister said a full scale investigation will be carried out with the assistance of local and foreign experts to apprehend the suspects. The investigation will look into ascertain whether there is an international link behind this brutal attack.
The Prime Minister stressed that no room will be left for terrorism to raise its head in the country and said it should be wiped out to secure peace. “All measures will be taken to eradicate all forms of terrorism from the country.
The tri-forces and the police are taking action to ensure a peaceful atmosphere,” he noted.
The Prime Minister said that no sooner he heard of the tragedy, he took immediate measures to ensure the safety of people.
“Many measures were taken to strengthen law and order. I as the Prime Minister discussed with relevant parties including Secretary Defence, Chief of Defence Staff, IGP, Tri-forces Commanders to bring the country to normalcy. Schools will be closed for two days while universities will be closed until further notice.
Having discussed with the President, a curfew was imposed” he said.
The Health Minister has been advised to take every possible measure in treating the injured.
The Prime Minister added that several world leaders contacted him and expressed their condolence and expressed their fullest support in eradicating terrorism and to bring the country to the normalcy.“Indian Prime Minister Narendra Modi and Pakistan Prime Minister Imran Khan expressed their condolence and said that they are with Sri Lanka to wipe out terrorism. Besides, the Prime Minister of Nepal also offered his support,” he added.
The Prime Minister said that compensation will paid for the victims and the two churches which came under attack will be renovated with public funds.
He added that he discussed with Cardinal Malcom Ranjith and the Chief Incumbents.
The Prime Minister expressed his deepest condolence to the victims, injured and their families on behalf of the government.