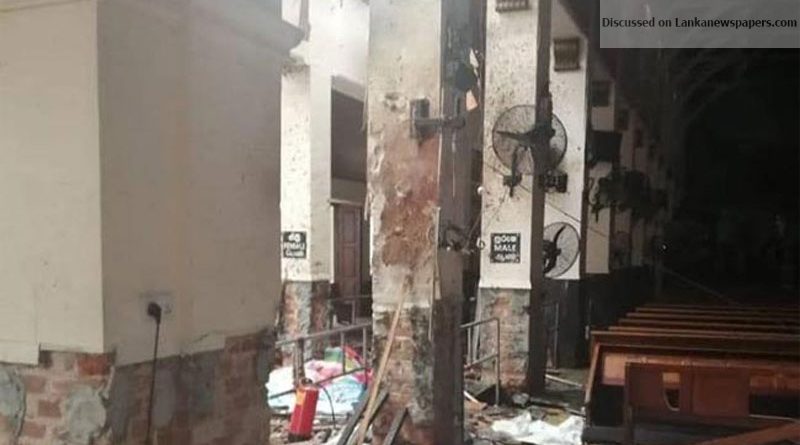 17:30  The death toll for the Easter Sunday terror attacks has risen to 207 with 450 reported to have been injured, police said.
Police Spokesman Ruwan Gunasekara said 66 bodies were placed at the National Hospital while 260 injured were receiving treatment there and 104 bodies were placed at the Negombo Hospital and 100 injured were receiving treatment at the Hospital.
Meanwhile, speaking to the Daily Mirror, Director of the National Hospital Dr. Anil Jasinghe said eleven foreign nationals from Poland, Denmark, China, Japan, Pakistan, USA, India, Morocco and Bangladesh are among the dead at the National Hospital.
The Director also said that 30 individuals were admitted to the Colombo North Hospital with injuries, while 69 were admitted to the Batticaloa Hospital, 55 at the Negombo hospital and 14 injured children were admitted to the Lady Ridgeway Hospital.
15:10 The government has decided to temporarily block social media sites including Facebook and Instagram. Presidential Secretariat said in a statement that the decision to block social media was taken as false news reports were spreading through social media.
15:03 Another explosion was reported close to a housing complex at Dematogoda a short while ago, police said.
15:00 President Maithripala Sirisena has instructed the Inspector General of Police (IGP) to impose police curfew across the island with effect from 6.00 p.m. today until 6.00 a.m. tomorrow, President’s Secretary Udara R. Seneviratne said.
14:30 All 6 blasts which occurred early this morning were a result of suicide bombers; initial investigations have revealed. The Daily Mirror learns that investigations thus far have revealed that two people had checked into room number 616 of the Shangri-La Hotel on April 20, 2019.
14:21 Another explosion was reported a short while ago near the zoo in Dehiwala, police said. Two people were killed in the explosion.
13:02 Opposition Leader Mahinda Rajapaksa said it was absolutely barbaric to see violent attacks on such a holy day and that whoever is behind these attacks must be dealt with immediately.
12:57 While condemning the attacks, Prime Minister Ranil Wickremesinghe called on all Sri Lankans during the tragic time to remain united and strong. “I strongly condemn the cowardly attacks on our people today,” he said.
12:45 Issuing a special statement over the terror incidents, President Maithripala Sirisena said he has given instructions to take stern action against the people who are responsible for the conspiracy.
12:30 At least 138 people were killed while many others were injured in the six explosions today, National Hospital Director Anil Jasinghe said.
He said 49 people were killed in Colombo, 62 in Negombo and 27 in Batticaloa.
In Colombo, over 200 were injured, while 110 injured in Negombo. Dr. Jasinghe said 67 were injured in Batticaloa.
“The situation is under control at hospitals,” he said.