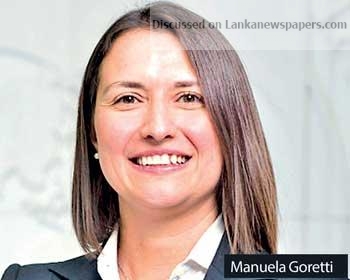 Sri Lanka yesterday reached a staff level agreement with the International Monetary Fund (IMF) on the fifth review of the   US$ 1.5 billion 3-year Extended Fund Facility (EFF), the country first entered in June 2016.
“The team reached understandings at the staff level with the Sri Lankan authorities on the fifth review and their request to extend the EFF arrangement for an additional year with the remaining disbursements being evenly spread over this period to allow more time for the completion of the economic reform agenda,” IMF mission chief for Sri Lanka Manuela Goretti said.

Sri Lanka is yet to receive about US $ 500 million from the IMF under the 3-year EFF. Subject to the planned submission to Parliament of the 2019 budget consistent with the EFF-supported programme, the IMF Board is expected to consider Sri Lanka’s request for the completion of the fifth review in May 2019.
“The authorities are taking steps to complete all the pending action and structural benchmarks for this review over the next few weeks,” IMF mission chief for Sri Lanka Manuela Goretti said.
An IMF staff team led by Goretti visited Colombo during February 14-28, 2019 to resume discussion on the fifth review under the EFF, which was suspended due to the October 26 political crisis.
Meanwhile, IMF said it welcomes Sri Lankan authorities’ commitment to raise the primary surplus to 1.5 percent of GDP in the upcoming 2019 budget and bring down the fiscal deficit to 3.5 percent of GDP in 2020.
The multilateral lender stressed that at this difficult juncture a concerted effort is needed by all stakeholders to preserve the hard-won gains of the economic reform programme, support macroeconomic stability and strengthen the economy’s resilience to shocks, given the high level of public debt and low reserve buffers.
“Sustained fiscal consolidation through domestic revenue mobilization and prudent spending remains a priority to maintain public debt sustainability. Consistent implementation of the 2018 Inland Revenue Act (IRA) and the modernization of the Inland Revenue and Customs departments are needed to achieve this goal,” the IMF said.
Under the EFF-supported programme, greater revenue mobilization is expected to make space for better-targeted social and capital spending, while a more business-friendly tax regime under the IRA can support investment and growth.
The team welcomed the authorities’ commitment to put the high public debt on a downward path, bringing the fiscal deficit to 3.5 percent of GDP in 2020, in line with the reform programme objectives, and 2 percent of GDP over the medium term, by adopting a sound fiscal rule and launching a new medium-term debt strategy. “Renewed efforts to improve transparency, accountability, and cost-efficiency of large State-owned enterprises are needed to help safeguard fiscal sustainability and catch up with delays in reform implementation.
The authorities should move forward with plans to bring SriLankan Airlines on a sound commercial and financial footing and complete energy pricing reforms to address rising fiscal risks,” the IMF said.

The visiting IMF team also acknowledged Central Bank’s efforts to rebuild foreign reserve buffers to adequate levels and allow exchange rate flexibility to protect the economy against shocks.
The IMF team urged that the Central Bank should continue to maintain a prudent and data-dependent monetary policy, standing ready to tighten policy rates, should inflationary pressures re-emerge.
The team further urged the authorities to finalize the amendments to the Monetary Law Act with a view to strengthen Central Bank’s mandate, decision-making structures, autonomy, accountability, and transparency in the roadmap towards inflation targeting.
“Ongoing steps to strengthen financial sector stability, in line with the recommendations of the recent Financial System Stability Review, are welcome. These should include efforts to harmonize the regulatory and supervisory regimes and strengthen the crisis-preparedness toolkit for financial institutions. The CBSL has also made progress in strengthening the Anti-Money Laundering and Countering the Financing of Terrorism regime.
“Structural reforms should continue to support strong and inclusive growth and mitigate the distributional impact of the economic adjustment. Priorities include promoting trade openness and investment, strengthening the governance and anti-corruption framework, encouraging female labour force participation, enhancing social protection and crisis preparedness in response to natural disasters,” the IMF said.
The visiting IMF team met with Prime Minister Ranil Wickremesinghe, Finance Minister Mangala Samaraweera, State Minister of Finance Eran Wickramaratne, Central Bank Governor Indrajit Coomaraswamy, other public officials, and representatives of the business community, civil society, and international partners.