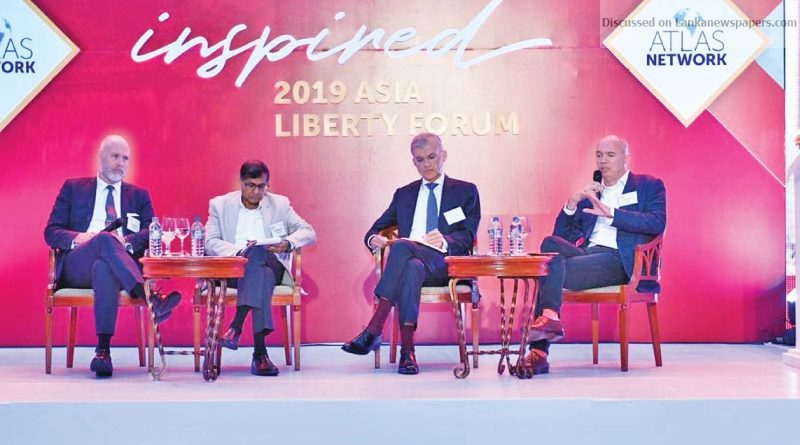 Sri Lanka needs to implement much needed economic reforms at least for the next five years, particularly to address the issue concerning the debt burden, Dr. Ganeshan Wignaraja, from the Lakshman Kadirgamar Institute of International Relations and Strategic Studies, Sri Lanka said.

Dr. Ganeshan Wignaraja made these views on the first day of the ‘Asia Liberty Forum 2019,’ held at the Hilton Hotel, Colombo. The two -day forum is being organized by the Advocata Institute, Sri Lanka.

Noting that country would face the reality of debt overheads despite that fact that who would come to power following the results of the upcoming Presidential election and Parliamentary election to be held by the end of this year and next year respectively, he said.

“It is the responsibility of successive governments to place the economy on a sounder footing to revive growth and most importantly to accrue benefits to the ordinary citizens,” he added.

Speaking on the common challenges faced by the South Asian region, he pointed out three main challenges, which include the political instability in the region, mainly due to the escalating conflict between Pakistan and India, the upcoming elections in India and Sri Lanka and most importantly, specific issues relating to the One belt-One Road initiative of China.

He further said that China had inspired the infrastructure growth and investment model, while the western inspired growth model had been poorly implemented in Sri Lanka.

Dr. Christer Ljungwall from the ENC Center for Global Affairs, Sweden, speaking at the forum on the growing influence of China in the South Asian region, said he would not consider China as a challenge. Instead, he emphasized that the rest of the countries in the region need to deal with it in a pragmatic manner.

“We have to deal with it and find ways to integrate with them in order to create value for the ordinary citizens, while conveying our message to them in a right manner.”