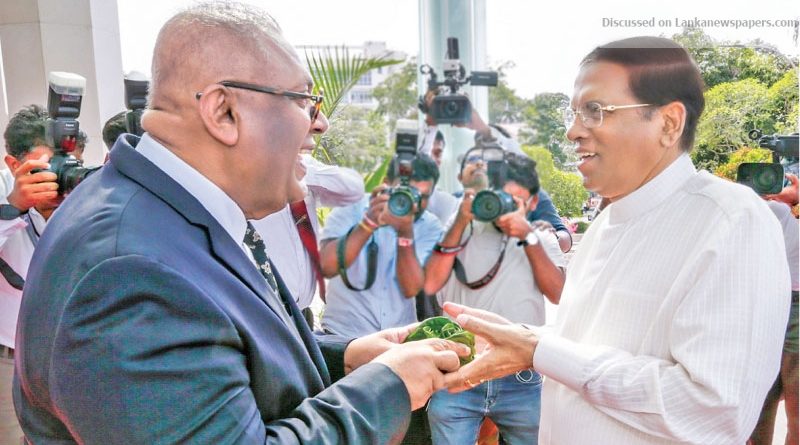 Finance Minister Mangala Samaraweera celebrated his 30 glorious years in politics at a ceremony held at BMICH yesterday under the theme, ‘Dare to Dream of a new Sri Lanka’.

In his welcome address Finance Minister Mangala Samaraweera said that when he entered Parliament 30 years ago in February 1989, his head was full of dreams. “I had dreams for my country, dreams for my people and dreams for myself. At the time, a war was raging in the North and an equally tragic youth insurrection was raging in the South. Therefore, I dreamt mostly of peace. Thousands of lives were lost in the country and I thought I could make a difference at the time. I have always been a dreamer from my early age. One of my earliest dreams was to become a racing driver, but I have never driven in my life and even today I don’t have a driving licence. Later I dreamt of becoming a designer and taking London and Paris by storm, but I decided to pursue my career in politics at home.”

Paying special tribute to his patents, Samaraweera said his father was a dreamer but his mother was a realist and very practical and grounded woman. “I am a dreamer like my father but my mother was a grounded and compassionate person. If the people of Matara respected my father, they loved my mother. Some of my better qualities I have inherited from her,” he said, adding that he has been referred to as Khema’s boy and he considers it an honour, considering the woman his mother was.

President Maithripala Sirisena participating in the event said Mangala and himself had gone to Parliament for the first time as opposition members. “Mangala is a man with a good heart and has worked tirelessly for democracy and freedom. He was committed to his work and is a decent human being capable of winning over anyone with his honest and sincere mannerisms. He is very clever and capable and knowledgeable and the country needs people of his calibre,” he said.

The President said that it is important to first enter Parliament as an opposition member because then you learn a lot. “Then by the time that person becomes a minister, he or she would have become seasoned politician having gained experience. Having an illustrious political past, Mangala has a long way to go in his political career,” President Sirisena said. He wished the Finance Minister a glorious and productive future in his political career.

Prime Minister Ranil Wickremesinghe said Mangala Samaraweera had commenced his political career on the other side of politics. “Mangala is a person who led the criticism campaign against me. But he worked according to certain principles which promoted democracy, peace and rights for all. Although he was on the opposition side, we both worked towards the freedom of the country. Later having joined the correct side, the UNP, he served as the Foreign Minister in 2015 and is now the Finance Minister.”

On a lighter vein, Prime Minister Wickremesinghe joked that it was best that Minister Mangala Samaraweera held this function before the Budget as he is not sure if he would receive so much praise after the budget.

The theme of yesterday’s event was ‘Dare to Dream’ and the Prime Minister said that Mangala dreamed of a democratic and free Sri Lanka. “Back in those days, Sri Lanka was way ahead of the other countries in this region, but with many issues that took place in our country, many of these countries overtook us. However, we must face the challenges ahead and move forward fearlessly. If we fear to forge ahead and face the challenges, we would stagnate. Like our ancestors who took up challenges courageously, we too should take on all challenges before us and forge ahead to bring about prosperity for our country.”

Diplomat, academic and human rights advocate Ambassador Samantha Power, who served the Barack Obama Administration for eight years, delivering the keynote address said only Mangala Samaraweera could have made her leave the final touches to her book and travel so far. “I don’t even leave the house to get groceries as I am finishing the final stages of my latest book. But if there is one person who could get me to put my work on hold and travel 8,000 miles at this moment, it is Mangala. He is one of the most extraordinary people I have met during my career. I simply had to be part of this momentous moment.”

Power said that when she had asked Mangala Samaraweera what he wanted her to speak on, he had said, “the less spoken about me the better”. She noted that coming from a country where politicians want to be the centre of attraction at every event, it was surprising to hear Samaraweera wanting as little as possible spoken about him. “The three things that I believe runs through Mangala’s extraordinary life’s works are dignity, modernization and democracy. The son of a remarkable trailblazing mother and a pioneer human rights lawyer father, Mangala thought maybe he could make a difference. Mangala rest assured you have made one hell of a difference.”