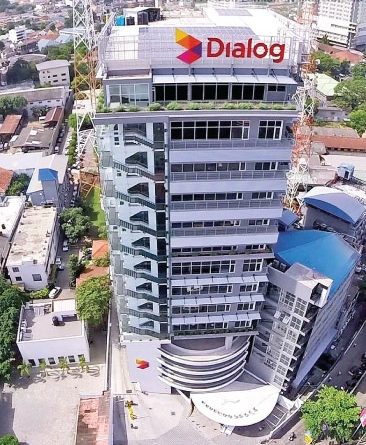 Dialog Axiata PLC has recorded a consolidated revenue of Rs 109.2 billion, demonstrating a growth of 16% Year-to-Date (YTD) for the year ended December 31, 2018.

Group Net Profit After Tax (NPAT) declined 30% YTD to be recorded at Rs7.5 billion for FY 2018. The QoQ NPAT contracted 95% to reach a modest Rs. 0.1 billion due to forex losses and higher depreciation.

The Group embarked on an organisation transformation journey to accelerate simplification and digitisation of business activities, processes and competencies to fully leverage on capabilities of digital platforms and technologies. One-off costs related to this program is estimated to be Rs. 2.5 billion which has been provided for in the financial statements during Q4 2018.

Dialog Group continued to be a significant contributor to state revenues, remitting a total of Rs. 34.1 billion to the Government of Sri Lanka (GoSL) during the financial year ended 31st December 2018. Total remittances included Rs 8.5 billion in Direct Taxes and Levies as well as Rs25.6 billion in Consumption Taxes collected on behalf of the GoSL.

The Board of Directors of Dialog Axiata PLC at its meeting held on February 15, 2019, resolved to propose for consideration by the Shareholders of the Company, a cash dividend to ordinary shareholders amounting to thirty seven cents (Rs 0.37) per share totaling to Rs 3 billion.

Capital expenditure was directed in the main towards investments in High-Speed Broadband infrastructure to further strengthen the Group’s leadership in Sri Lanka’s Broadband sector. Notwithstanding the expansion of capital investments, the Group recorded Operating Free Cash Flow (OFCF) of Rs 5.2 billion for FY 2018.

Underpinned by revenue performance and cost optimisation, Company EBITDA increased 13% YTD to reach Rs30.4 billion for FY 2018 translating to an EBITDA margin of 36.0%. The Company EBITDA declined 33% QoQ to record Rs5.8Bn for Q4 2018 mainly due to the aforementioned one-off provision on organisational transformation.

The depreciation of the LKR as alluded to earlier impacted the Company as the NPAT declined 58% YTD to reach Rs 4.4 billion for FY 2018. The NPAT also declined on a QoQ basis and resulted in a Net Loss of Rs2.6 billion for Q4 2018. On normalising for the non-cash translational foreign exchange losses, Company NPAT was recorded at Rs8.9 billion for FY 2018, down 18% YTD.

Dialog Television (DTV), continued to consolidate its leadership position in the Digital Pay Television space with a subscriber growth of 17% YTD to exceed 1.1 million as at end of December 2018. DTV Revenue grew by 25% YTD to be recorded at Rs7.5 billion for FY 2018. DTV EBITDA was recorded at Rs1.8 billion for FY 2018, up 221% YTD, mainly driven by SLFRS 15 impact.

Dialog Broadband Networks (“DBN”) continued its strong performance to record a revenue growth of 39% YTD to reach of Rs17.2 billion for FY 2018.