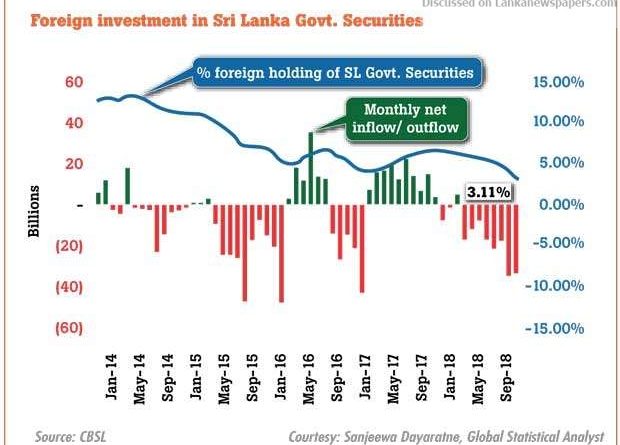 Sri Lanka’s Central Bank has cut foreign investor threshold in purchasing government securities (G-secs) in a bid to increase the quality of the country’s foreign reserves and significantly reduce the amount of so-called hot money that could easily flow out and destabilise the external sector.
The Public Debt Department of the Central Bank yesterday in a statement announced the Monetary Board’s decision to reduce the threshold of foreign investments in Treasury bills and Treasury bonds from 10 percent to 5.0 percent with effect from January 18, 2019.
At present, foreign holding stands below 5.0 percent of the total stock of G-secs issued. At the end of 2018, foreigners held around 3.11 percent of the total G-Secs stock.
The intention to bring down this threshold was first announced by Central Bank Governor Dr. Indrajit Coomaraswamy at the beginning of the year,  unveiling monetary and fiscal policies for 2019 and beyond.
“In view of the increased volatility in global financial markets, we also intend to reduce the threshold for foreign investment in rupee denominated government securities from 10 percent of the outstanding government securities stock at present to 5 percent,” Dr. Coomaraswamy said.
Sri Lankan rupee was severely battered during 2018 and the country lost a significant amount of external reserves during this period as foreigners sold local bonds amid rising yields in the United States.
The situation was further exacerbated after October 26 when President Maithripala Sirisena triggered a constitutional crisis, which left the country without a legitimate government for over six weeks.
This led to all three international credit rating agencies to cut Sri Lanka’s sovereign rating due to heightened refinancing risks and uncertainties in the country’s ability to meet fiscal targets, which spooked investors.

Sri Lankan rupee weakened 19 percent during 2018 and foreigners sold a net Rs.159.9 billion of G-secs during the year, a decline of 55 percent from a year earlier.
However, during the week ended January 25, 2019 the bond market received a net inflow of Rs.4.7 billion. Nevertheless, the year-to-date net outflow was Rs.14.3 billion.
During 2018, the Central Bank became a net seller of foreign reserves worth US $ 1.12 billion from a net purchasing of foreign reserves worth US $ 1.165 billion in 2017.