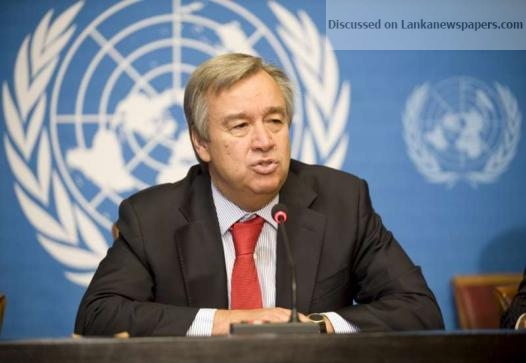 The UN Secretary-General, António Guterres, strongly condemned the attack which led to the deaths of two ‘blue helmets’ from Sri Lanka and injured six others.

Mr Guterres conveyed his “deep condolences to the Government of Sri Lanka, and the families of the victims”, and wished a speedy recovery to those injured.

A peacekeeper from Burkina Faso was also injured in a separate IED attack against another convoy near the same area, on Thursday.

“These cowardly acts will not deter MINUSMA’s determination to support the people and Government on Mali in their pursuit of peace and stability”, a statement issued by his spokesman read.

Just last Sunday, a terrorist attack against the mission’s camp in Aguelhok, in the Kidal region, killed ten peacekeepers from Chad.

Recalling that attacks targeting UN peacekeepers may constitute war crimes under international law, Mr Guterres called on the Malian authorities to “spare no effort” in identifying the perpetrators of Friday’s attack, so that they can be brought to justice as swiftly as possible.

A proliferation of armed groups fighting government forces and their allies in the centre and northern areas of Mali following a failed coup six years ago, have made MINUSMA the most dangerous mission to serve in as a UN ‘blue helmet’. The Malian Government has been seeking to restore stability and rebuild following a series of setbacks, since early 2012.

The escalating violence reported by the UN in parts of the Mopti region has led to widespread displacement of a civilian population already vulnerable due to a lack of protection and basic social services provided by the state.

A team of human rights officers serving with MINUSMA travelled at the beginning of January to the region to investigate recent armed attacks in the settlement of Koulogon Peul, in which at least 37 civilians were killed, and a number of houses and granaries were deliberately burnt down.

The members of the Security Council expressed their deepest condolences in a statement released on Friday night, and expressed sympathy to the families of the victims, as well as to Sri Lanka and to MINUSMA.  Council members wished a speedy and full recovery to those injured and  “paid tribute to the peacekeepers who risk their lives.”

The 15-member body “called on the Government of Mali to swiftly investigate this attack and bring the perpetrators to justice. They underlined that attacks targeting peacekeepers may constitute war crimes under international law.”