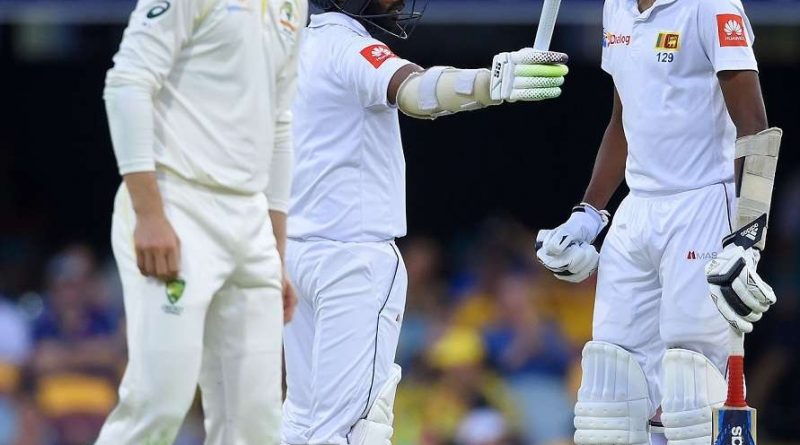 A reshuffle of personnel and a change of opponent brought a much-sought shift in performance for Australia who ended the opening day of their Test campaign against Sri Lanka in a position of rare recent strength.

The loss of key seamer Josh Hazlewood did not blunt Australia’s pace attack, as rookie Jhye Richardson starred to claim 3-26 from 14 quality overs while fellow quicks Pat Cummins (4-39) and Mitchell Starc (2-41) cleaned up around him.

Along the way, Starc became the 17th Australia bowler to reach 200 Test wickets before he eased past legendary fast bowler Jeff Thomson to leave the field at innings end with 201.

Thomson had famously terrified the new-to-international cricket Sri Lankans at the 1975 World Cup with his pace and hostility, and there were times today as the tourists capitulated for 144 that they seemed similarly at sea against pace bowling.

By stumps after day one of the two-match Domain Test series, Australia had reduced the deficit by half due mainly to another assured, unbeaten 40 from Marcus Harris who has assumed the role of reliable veteran despite having arrived at Test level just last month.

However, the dismissals of his opening partner Joe Burns (15) and number three Usman Khawaja during the final floodlit session means the hosts are far from dominant at 2-72 given the inexperience of their middle-order.

Which comprises Marnus Labuschagne, new vice-captain Travis Head and debutant Kurtis Patterson who are all in their maiden season of Test cricket and do not boast a Test century between them.

Sri Lanka had begun their two-Test sojourn in the manner they had surely hoped – and the circumstances that Australia captain Tim Paine feared was inevitable – when Dinesh Chandimal won today’s coin toss and opted to bat under blue skies and enervating heat.

It was the seventh time from his eight starts as skipper that Paine has ended up on the wrong side of the coin toss, and his only Test win during that time coincidentally came in Perth where it landed in his favour.

But that was pretty much where the tourists’ fortune began and ended, as the frailties of their brittle batting were harshly exposed before the Gabba floodlights took effect.

For the sixth time in their past 11 Tests, Sri Lanka failed to crest 250 in their first innings though only once in that time – their previous outing against New Zealand in Christchurch a month ago where they were knocked over for 104 – have they managed less than today’s effort.

The final tally of 144 from 56.4 overs in less than four and a half hours would have been significantly skinnier but for keeper Niroshan Dickwella’s belligerently audacious 64 from 78 balls faced.

It might also have been marginally fewer had opener Lahiru Thirimanne not belatedly chosen to review his lbw decision against Starc in the fifth over, a decision that briefly installed the Australia quick in Test cricket’s 200-wicket club.

The honour was rescinded when ball tracking technology showed it to be missing leg stump, but if Sri Lanka believed it would accordingly be their day they were quickly proved sorely misled.

Thirimanne added just five to his score before he edged Cummins to the array of catchers laying in wait behind the wicket, a mode of dismissal that would be hauntingly familiar by evening’s end.

It signalled the start of a dire descent into mediocrity for Sri Lanka who showed a mental willingness to hang in but a technical predisposition to getting out.

That deficiency was exposed by Richardson who had less experience at Test level than any of his rival, but accounted for the visitors’ two best-credentialled either side of the mid-afternoon tea break.

His removal of Chandimal for five, three deliveries after the Sri Lanka skipper had edged fortuitously through the slips cordon for a flashy boundary, brought understandable glee as Joe Burns’s slips catch heralded the debutant’s inaugural Test wicket.

Of perhaps greater consequence was his removal, with his third ball after tea, of the talented Kusal Mendis who had never looked comfortable throughout his 44-ball stay that yielded just 14 runs with a solitary boundary.

Mendis, who a month ago batted for more than a day of Test cricket to earn his team a draw against New Zealand, was undone by a canny bit of bowling that saw Richardson angle the ball into the right-hander only to have it straighten slightly and tilt back off-stump.

That wicket reduced Sri Lanka to 4-58, which became 5-66 when Roshen Silva was the fourth of those to edge to the cordon on a pitch that offered both demonstrable bounce and noticeable movement.

Although the bowler who seemed to benefit most from those factors was off-spinner Nathan Lyon, whose opening delivery spun so sharply and bounced so steeply that opener Dimuth Karunaratne might have secretly yearned for a return of the quicks.

It was no surprise that it was Lyon who ultimately skittled Karunaratne, the obdurate opener around whom his more expansive teammates look to bat and who had endured for almost two hours before gloving a catch to Paine in the shadows of the tea break.

His 24 loomed as the most substantial contribution to a sub-par total until Dickwella threw caution to the breeze and the bat at everything in a last desperate attempt to prevent Sri Lanka becoming the first Test team to be skittled for less than 100 having chosen to bat first at the Gabba.

At 6-93 and with spinner Dilruwan Perera having retired hurt after copping a fearful blow to his right thumb from a brutal short-ball from Cummins that ignominious piece of history loomed uncomfortably large.

However, with a series of bravely ambitious – and occasional flourishes of comic improvisation – Dickwella heaved his way to an invaluable half-century that gave Sri Lanka something to bowl at, if not genuine hope.

The stand-out effort from Dickwella’s 118-minute innings was the falling down ramp shot he aimed at Starc who had finally snared his 200th Test wicket and then his 201st in rapid succession.

Not only did that stroke sail harmlessly over the head of his rival keeper Tim Paine, it kept sailing until it cleared the boundary rope in front of the sightscreen at the Vulture Street end.

By the time Dickwella finally holed out in the 57th over, he was swinging in a manner more often associated with the final phases of a KFC BBL fixture.

It also meant that Australia’s re-shaped top-order then faced the prospect of negotiating the pink ball under the full glare of artificial light, with their innings begin.

L. Kumara not out0 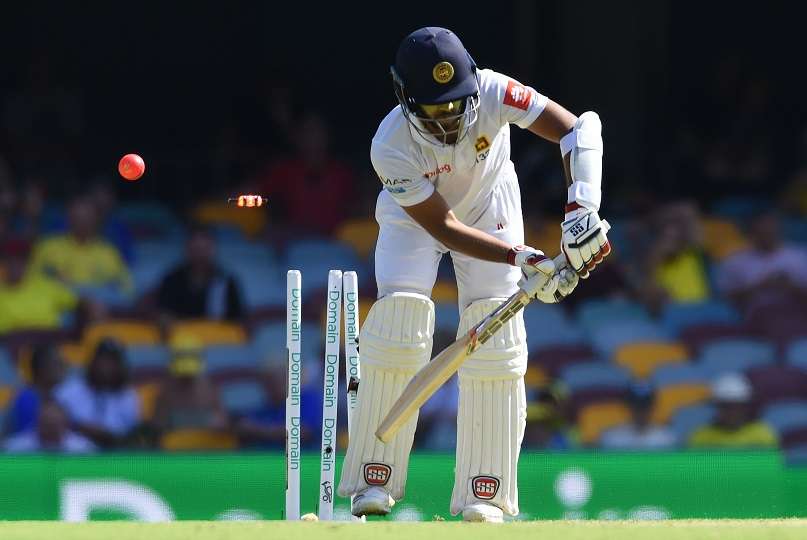 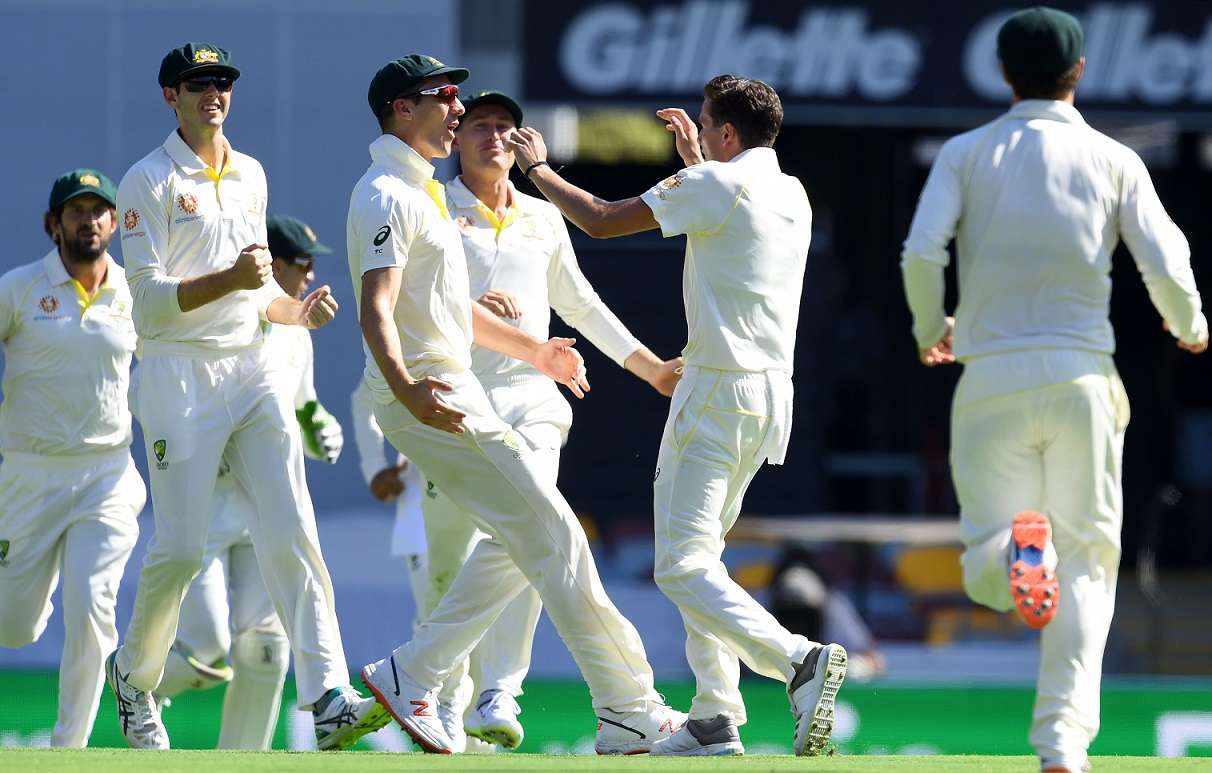