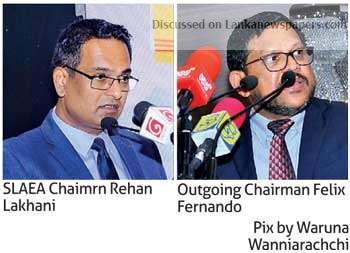 As Sri Lanka’s apparel sector has embarked on a journey to achieve US $8 billion in exports by 2025, the industry requested the government’s to assistance to enhance access to emerging markets with more free trade pacts and consistent policies.
This comes in the light of Sri Lanka’s traditional apparel export markets, such as the United States (US) and the European Union (EU) becoming stagnant.
“Our traditional market share is more or less static. Therefore, in the final analysis, the Sri Lankan apparel industry needs to penetrate more into emerging markets such as India, China and Brazil.

Thus, market promotion is the need of the hour,” the newly elected Chairman of the Sri Lanka Apparel Exporters Association (SLAEA), Rehan Lakhani stressed.
He was addressing the post business session of the 36th Annual General Meeting of Sri Lanka Apparel Exporters Association held in Colombo this week. SLAEA outgoing Chairman Felix Fernando pointed out that the growing apparel markets of China and India are projected to surpass several developed markets, thereby representing a significant portion of the global apparel consumption.
“All four BRIC nations appear among the top markets having a cumulative share of approximately 23 percent.
“Combined apparel consumption of the US and the EU is 40 percent while they are a home to just 11 per cent of the world’s population, implying a very high level per capita expenditure on apparel compared to the rest of the world,” he noted.
The US and EU account for nearly 87 percent of Sri Lanka’s apparel exports.
“It is true that the US and EU were vital markets in the past and the present, and that without their help, Sri Lanka’s apparel industry could not have achieved its glory, and we are indeed grateful to buyers from the US and the EU for having their faith in Sri Lanka during this glorious journey.
However, we simply cannot dwell on past successes. We need to adapt to the aforementioned market changes to continue our industry growth,” Fernando asserted.
Meanwhile, as global apparel industry is increasingly focusing on near-shoring due to developments in logistics management, where holding minimum amount of inventories and fulfilling small orders in time deliveries gaining traction, Lakhani stressed that Sri Lankan apparel industry must diversify its markets to adapt to these developments.
Former Export Development Board (EDB) Chairperson and Chief Executive Officer Indira Malwatte highlighted that Sri Lanka’s apparel exports to India have nearly doubled to US $80 million in 2018.
Even though it represents a fairly small share of Sri Lanka’s apparel exports, she pointed out that Sri Lankan apparel exports exceeded the apparel import quota set by India, which indicates the high demand for Sri Lankan apparel in the Indian market.
Lakhani insisted that Sri Lanka should pursue a sectorial liberalisation through the proposed Economic and Technology Co-operation Agreement (ETCA) with India to increase market access for Sri Lankan apparel exporters to that country.
“India is becoming a focal point for the fashion industry as its middle class consumer base is growing and manufacturing sector strengthening. Fashion players must redouble their efforts in this highly fragmented and challenging market where educated and tech savvy demographic rub shoulders with the poor and upwardly mobile, and it is for that reason we have continued to impress upon our government to use bilateral FTAs as a tool for market penetration to these  countries” he elaborated.
According to Lakhani, Sri Lanka is importing inputs such as fibre, yarn, fabric and finished apparel products worth of US $700 million from India per annum, while Sri Lanka’s apparel exports to India stood at US $80 million in 2018.
Hence he suggested that Sri Lanka should discuss with Indian authorities an interim measure to increase or remove the quota. “Any interim measure to enhance the quota of 8 million pieces without attaching strings such as Indian fabric usage would become very handy especially as a confidence building exercise,” he said.
Lakhani urged the government to engage in consistent and predictable policy making to ensure that the exporters utilise their resources in marketing their products rather than utilising them to resolve domestic process issues arising from unpredictable and inconsistent policy decisions.
He drew attention to serious issues in logistics that the exporters had to go through due unpredictable policy making of the government this year.
“On the domestic front, we started the journey in 2019 with a number of serious issues in hand. The SLPA tariff increase, new shipping policy draft, new procedure for monitoring of export proceeds are some of them,” he said.
He pointed out the tariff increase lacked a consultative process and the exporters were not given advanced notice to predict additional costs.
Underlying other challenges that the apparel industry faces, Lakhani said, “Our costs are increasing, we are not sure what is in store for us in the UK; domestic labour market dynamics dictate us to disrupt our business models demanding investments in advanced technology, more up-skilled labour force lean and conscious energy sensitive production environment.”

Sri Lanka apparel industry has surpassed the US$ 5 billion mark in exports for the first time in history.
The Joint Apparel Association Forum (JAAF) in a statement said the total earnings from the export of apparel products falling under HS chapters 61, 62 and 63 amounted to US$ 5, 050 million in 2018, registering an increase of 4.79 percent compared to the export turnover of US$ 4, 819 million in 2017.

The USA and the EU continued to be the two largest buyers of Sri Lankan garments, in both volume and value.
JAAF said this achievement is in line with the second strategic plan that was prepared for the industry, and this feat was achieved despite many external challenges.
Local textile and apparel industry employs nearly 350,000 workers directly and twice as many indirectly. Total employment is estimated to be in the region of 15 percent of the country’s eligible workforce. The majority of this workforce is women from regional areas.
The contribution of the textile and apparel industry to the GDP is around 6 percent based on re-based GDP estimates.
Given the development of other sectors, it is very unlikely that any other manufactured export sector will come up to this level of performance in the short to mid-term. Hence, the apparel industry will continue to influence the level of economic development in the mid-term. “The desire of the apparel industry is to reach a target of US$ 8 billion by 2025 which requires a 6 percent annual compound growth, which is a very ambitious target.
“While the industry by itself will take all possible steps to meet capacity, technology and resource issues, the envisaged market access programmes through regional, multi-lateral, or bi-lateral trade arrangements are also extremely important particularly with emerging markets such as India, China and Brazil,” JAAF said.
The industry is looking forward to raising the bar to the next level with effective public-private partnerships with the government on policy making.