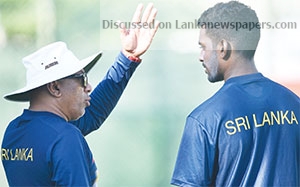 With the series already in the bag, England will try to become only third team to hand Sri Lanka a whitewash at home by winning the third Test match that will get underway today at the Sinhalese Sports Club grounds.

Only Australia (2004) and India (2017) have won here 3-0 and England have momentum behind them to complete the rare achievement following their 211 run win in Galle and 57 run victory at Pallekele.

“It’s been quite a journey for the group of players. We did start the year in difficult circumstances and weren’t playing our best cricket but we’ve found a way to get to a really strong position. It’s been really pleasing that everyone has given us a great opportunity to hopefully win this series 3-0,” England captain Joe Root told journalists yesterday.

“There’s only been two other sides who have won 3-0 out here in Test cricket so it would be a brilliant achievement which would fill us with a huge amount of confidence going into the rest of the winter,” Root added.

England’s Head Coach Trevor Bayliss and Assistant Coach Paul Farbrace have been Sri Lanka’s Head Coaches at different stages during the last decade and Root appreciated their input in enabling to win the series with a game to spare.

“They’ve been brilliant. Very knowledgeable about the different grounds and how they’ve historically played, what they’ve seen with their time here in Sri Lanka and they have an insight into several of their players. So they’ve been brilliant in getting us well prepared for this tour. They’ve been a big driving force in where we’ve got to, really. Be great to have that experience and know-how in these conditions,” Root commented.

England will do two changes from the side that won at Pallekele with seamer James Anderson rested for the dead rubber and Stuart Broad filling in his place. All-rounder Sam Curran is nursing a side strain and Jonny Bairstow will come into the side in his place. Bairstow will play as a specialist batsman occupying the number three slot.

England’s lower order have put up some crucial stands throughout the series. In the second Test the last wicket produced over 100 runs with both innings put together with Sam Curran and Ben Foakes stitching crucial partnerships with last man James Anderson.

“In Pallekele there was a dropped catch, and if we had taken that the match could really have changed. We’re trying to stop that in this game. We can’t be making spinning pitches and letting their tail get runs. We have a plan to stop. We gave the spinners a lot of overs at the tail in the previous games because the pitch suited them. But as a seam bowler, maybe I will come into the equation in this match,” Suranga Lakmal, who is expected to be the lone seamer in the Sri Lankan attack said.

Lakmal will lead the side in the absence of Dinesh Chandimal, who failed to recover from a groin strain.

Sri Lanka will also miss the services of Akila Dananjaya, who is in Brisbane, Australia undergoing tests after his bowling was reported to be suspect by match officials. Twenty-one-year-old Nishan Peiris has been added to the squad.