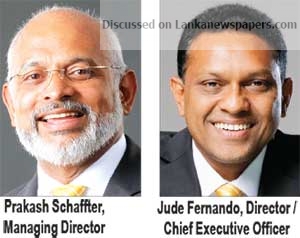 Janashakthi Insurance PLC (Janashakthi) continued on its growth journey, registering a Gross Written Premium (GWP) of Rs.2.2 billion as at September 30, 2018. The Insurer ended the period under review with post-tax profits of Rs.7.4 billion, including the gains from the sale of Janashakthi General Insurance Limited, a press release said.

It adds – ‘The Company’s investment income stood at Rs.1,125 million, growing by 14% over the Rs.984 million registered in Q3, 2017. This was primarily due to the 26% growth in its investment portfolio which stood at Rs.15.6 billion at the end of the period under review. Net claims and benefits increased from Rs.849 million to Rs.1,066 million, largely due to policy maturities of Life Investment products.

“In 2018, we have focused our effort on restructuring and reorganising our operations as a standalone Life Insurance business. Building on the momentum gained during the first half of the year, I am pleased to report that Janashakthi Life has continued to grow steadily during the third quarter of 2018, starting to reap the benefits of many of the strategic initiatives put in place throughout the first nine months of the year,” said Prakash Schaffter, Managing Director of Janashakthi Insurance PLC.

‘The Insurer, who celebrated its 24th year anniversary in September, continued to ramp up its dedicated Life branch network, opening 25 new branches around the island over the past few months. With more branches expected to be completed by the end of the year, the Company hopes that this new and improved network will act as the physical embodiment of the Janashakthi Life brand, spreading the protection of Life Insurance to all corners of the island.

“Janashakthi Life is strengthening its foundations to ensure that we are a cohesive, efficient team, geared to empower our salesforce to serve our customers better than ever before. In early November, we set up our new Life Headquarters in Colombo 02, which we hope will provide our team with a space to grow both personally and professionally, while delivering results for the Company. With the completion of our ongoing expansion and digital-led transformation efforts by the end of the year, we are geared to drive the business forward and emerge as a significant player in the country’s Life Insurance industry,” said Jude Fernando, Director / Chief Executive Officer of Janashakthi Insurance PLC.

‘Founded in 1994 as a Life Insurance company, Janashakthi Insurance PLC made its mark in the industry as an innovator and household name over a span of over 24 years. Janashakthi has a strong presence across the island, with an expanding Life Insurance network and a dedicated call centre. In line with its newly launched purpose of uplifting lives and empowering dreams, Janashakthi remains committed to becoming a leader in the Life Insurance industry by delivering a service beyond Insurance to its customers and stakeholders.’