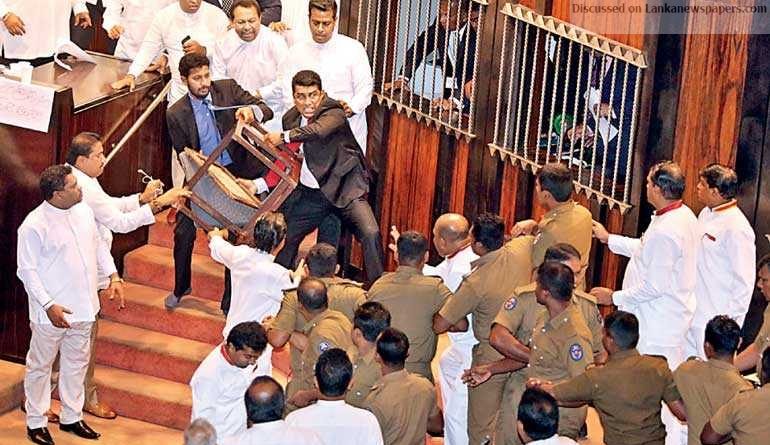 A second vote on the no confidence motion against MP Mahinda Rajapaksa passed yesterday with Speaker Karu Jayasuriya being forced to conduct the session from behind a human shield as Rajapaksa loyalists unleashed havoc in the House.

Regardless of President Maithripala Sirisena’s promise to party leaders on Thursday night to allow the vote to pass uninterrupted, UPFA MP Arundika Fernando occupied the Speaker’s Chair with the support of his colleagues who were loyal to MP Rajapaksa by forcefully standing on the Secretaries’ Platform.

The House assembly was delayed for over 45 minutes due to angry legislators protesting, demanding the arrest of UNP MP Palitha Thewarapperuma, who was caught on camera with what appeared to be a knife in his hand on Wednesday. UPFA MPs Wimal Weerawansa, together with Pavithradevi Wanniarachchi and Dilan Perera, led the slogans also demanding the arrest of UNP MP Ranjan Ramanayake for grabbing the object from MP Thewarapperuma and keeping it with him.

Unable to take control of the House, Speaker Karu Jayasuriya was compelled to order the Parliament police unit into the Chamber to provide him the security required to commence the day’s business, which finally ended with violence, assault, bloodshed, and resentful behaviour of lawmakers in support of the Rajapaksa camp. Despite the UPFA lawmaker’s unruly behaviour, the UNP, JVP and the TNA lawmakers sat calmly, ignoring the insults aimed at them without getting involved.  Forming a human chain, the police officers managed to accompany Speaker Jayasuriya, with the Sergeant-at-Arms Narendra Fernando carrying the mace into the Chamber.

The mock sitting continued, demanding the arrest of MP Thewarapperuma and MP Ramanayake. This demand was met by hoots from the Opposition benches. In the meantime, MP Dilan Perera was seen insulting UNP MP Mangala Samaraweera with offensive language and the irate MP replied using similarly offensive words.

Addressing the House, standing next to the Speaker’s Chair, UPFA MP Wimal Weerawansa rejected accepting Speaker Jayasuriya while demanding to ensure safety of the lawmakers in the Parliament. “The Governments are elected by the people of this country and not by foreign countries. Let the people decide at a general election. I urge the Supreme Court to take the correct decision while thinking of the future stability of the country,” he said. Several representatives of foreign diplomatic missions were present in the gallery, witnessing the chaos.

MPs Pavithradevi Wanniarachchi, Bandula Gunawardena and Mahindananda Aluthgamage also made speeches. UPFA MP Prasanna Ranaweera was seen guarding the closed door behind the Speaker’s Chair used by the Speaker to enter the Chamber. MP Mahinda Rajapaksa, who made a brief appearance at the House, walked out of the chamber while his fellow MPs continued to protest.

The Speaker then commenced the sittings officially and Standing Orders were suspended by majority vote. All Opposition MPs who were in their seats supported the Speaker to carry on the proceedings. The no confidence motion against MP Mahinda Rajapaksa was placed before the House again, after removing the first Clause as agreed at the meeting with President Sirisena. The Speaker asked all MPs to go for a vote by name, but since the UPFA MPs ignored him, he took a voice vote. All Opposition MPs stood up from their seats, raised their hands and said “aye”. The Speaker then announced to the House that “the Ayes have it”, and the motion was carried while the UNF MPs cheered and applauded. The Speaker then adjourned the session till 19 November.