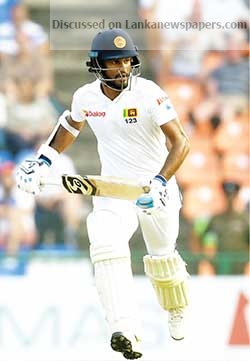 Today is the decisive day of the Test series between Sri Lanka and England as a significant first innings lead will help the tourists to end their 17 year wait for a series win in Sri Lanka. England fought themselves back into a strong position after a poor start. With the score on 225 for nine, last man James Anderson was given out leg before wicket to Akila Dananjaya. But the batsman reviewed and survived. The next ball Niroshan Dickwella missed a chance and England made Sri Lanka to pay as they finished on 285 all out with the last pair adding 60 valuable runs off 66 deliveries.

Sri Lanka lost Kaushal Silva cheaply in reply and were 26 for one at stumps on day one.

The Curran-Anderson stand hurt the Sri Lankans big time. There was lack of urgency among the fielders, who didn’t prevent Curran taking the single from last ball of an over and as a result the bowlers missed an opportunity to attack Anderson.

On a crumbling wicket, those 60 runs could prove to be vital and the body language of the Sri Lankan players heading back to the dressing room after England’s innings was over, told the story. It was déjà vu as the same thing had happened in Galle after Sri Lanka knocked off the top order cheaply.

The hosts will be looking to Dimuth Karunarante to get them out of jail once more. Two months ago, against South Africa, the left-handed opener batted expertly and he was on league of his own playing spin bowling expertly.

However, compared to South African spinners, England have a decent three pronged spin attack and Karunaratne has to bring up his best game to keep them at bay.

The day belonged to Curran. He was on 16 when Anderson joined him and lofted the Sri Lankan spinners bravely despite both long-on and long-off stationed there. His 64 contained six sixes and one four. All those sixes except one were hit straight down the ground and the one that was pulled off Akila Dananjaya brought up his third half-century.

Dananjaya was exposed for a second time in a row and with his bowling action already under scrutiny; his future hangs on the balance.

Jos Buttler too hit an entertaining half-century. His 63 came off 67 deliveries with seven fours, most of them sweeps – either the conventional or the reverse. The reverse eventually brought his downfall, dismissed caught at covers off Malinda Pushpakumara.

Dilruwan Perera finished with four wickets while Pushpakumara chipped in with three scalps.

D. Karunaratne not out 19