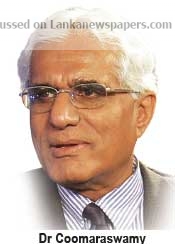 ” This year we adjusted the growth rate from 4 per cent to 3.5 percent due to drought that prevailed early this year. This has increased thermal  power generation with a higher consumption of oil, which has a direct impact on the oil imports bill, Dr  Coomaraswamy said at the monthly Central Bank monetary review press briefing. The meeting was held at the Central Bank auditorium yesterday.

He said that with the proper adjustment of gold and vehicle imports tariffs coupled with enough water in reservoirs due to rain, the country could have a good economic growth of more than 4.5 percent possibly next year.

Forex reserves had fallen to 7.2 billion by November 14 but more inflows are expected, he said. “The reserves had fallen partly due to a  US $ 500 million payment under the Asian Clearing Union,” he said.According to the Central Bank Governor foreign reserves rose to  US $ 7.9 billion by end October from US $ 7.164 billion in September helped by a billion US dollar loan from China. Sri Lanka is now defending the currency and printing money to fill liquidity shortages with a soft-peg with the US dollar under pressure, and capital outflows from bond and stock markets, he said. Dr. Coomaraswamy said Bank of Ceylon, People’s Bank and NSB are in talks to raise about US $ 750 million  to US $1 billion from Middle Eastern banks by the end of the year.

“The Central Bank is expected to end the year with US $ 7.8 billion of reserves,” he said.The country’s  main state banks are expecting to raise up to a billion US dollars from the Middle East by the end of the year, Dr Coomaraswamy said.State-run Bank of Ceylon, People’s Bank and National Savings Bank have already met Middle Eastern banks with another two large banks, he said.’Those  moneys will be invested in Sri Lanka Development Bonds. The banks would be able to raise loans at rates below the International Sovereign Bond rates, the Governor added.