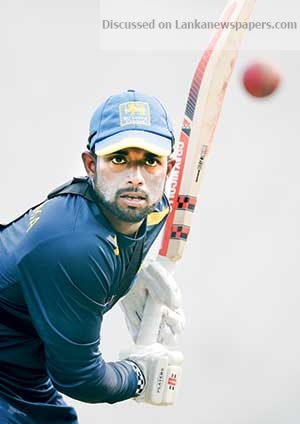 Richmond College, Galle has been producing some remarkable cricketing talents since late and one of brightest prospects to emerge from the school trained with the national cricket team in Kandy yesterday. Charith Asalanka rewrote Sri Lanka’s 17 year unbeaten record against England in danger Pallekele Test starts on Wednesday record books in school cricket two seasons ago and went onto captain Sri Lanka Under-19. Earmarked as a player for the future, the 21-year-old has replaced the injured Dinesh Chandimal.

It is unlikely that Asalanka will play the second Test match against England at Pallekele starting on Wednesday. Roshen Silva, who missed the Galle Test, which Sri Lanka lost by a huge 211 runs will make a comeback.

Sri Lanka will also think of a replacement for Rangana Herath, who retired in Galle. The hosts have left-arm orthodox spinner Malinda Pushpakumara and left-arm wrist spinner Lakshan Sandakan in the squad and they are likely to pick Pushpakumara to give the bowling more control.

Given the disappointing game he had in Galle, questions should be asked whether Akila Dananjaya should feature in the second Test. Sri Lankans already have an off-spinner in Dilruwan Perera and Dananjaya’s bowling action also has come under scrutiny. Perhaps, they will be better off playing both Pushpakumara and Sandakan.

Seamer Suranga Lakmal will lead the side in the absence of Chandimal and it will be interesting to see whether Chandika Hathurusingha will persevere with the lone seamer strategy employed in Galle. Another option would be to let fast bowler Dushmantha Chameera make way for one of the spinners.

Sri Lanka have a poor record in Pallekele where they have played six games but won only one.

Opening batsman Dimuth Karunaratne had a poor game by his standards in the first Test and he will be determined to make amends. The experienced Angelo Mathews scored twin fifties in the Galle Test but the team will be expecting much more from him.

England too have a few questions to ponder. Not often do you see England employing three spinners like they did in Galle. Their seamers are likely to enjoy the conditions at Pallekele more and Stuart Broad could perhaps come for leg-spinner Adil Rashid.

A freak ankle injury – playing football – saw Jonny Bairstow miss the first Test and Ben Foakes grabbed the opportunity from both hands making a hundred on debut. It will be tough for England to leave out Foakes given the excellent game he had in the first Test.

Sri Lanka Cricket was able to save face by ensuring that the second Test remained in Kandy although SLC was contemplating to move the game to Colombo due to double booking of hotel rooms in the team hotel.

Several Barmy Army fans generously sacrificed their rooms in the five star hotel in Kandy which is a stone’s throw from the cricket stadium. Most of these fans have been now put up at Dambulla and will at least spend one hour on the road whereas their Kandy hotel was a hop, step and jump from the ground.

Sports Minister Faizer Mustapaha is said to have agreed to compensate the fans. The coaches they travel from Dambulla are supposed to get police escorts to ensure less hassle during travel and free beer at the ground.

The fiasco, however, could have been avoided had the Sports Minister put in place an Interim Committee to run the affair of Sri Lanka Cricket after a court ruling stayed the cricket elections in May. Instead the Sports Ministry Secretary was appointed as Competent Authority to oversee the affairs of SLC.

Financial frauds, mess ups in hotel bookings and poor handling of affairs of the national team could have all been avoided but for the incompetent authorities.