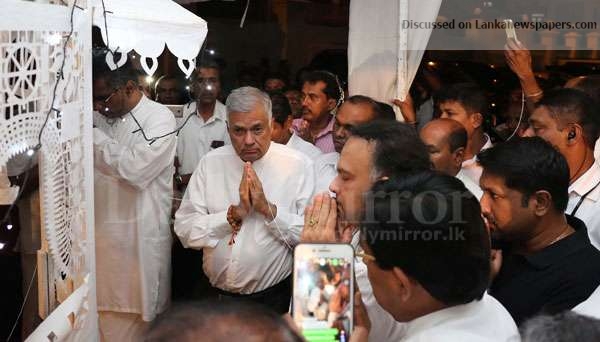 UNP Leader Ranil Wickremesinghe today said the interim order issued by Supreme Courts suspending the dissolution of Parliament was a resounding victory for the people’s franchise.

It is also a victory for decent politics,” he added.

“We appreciate the order given by the Supreme Court as there was lot of pressure on them. The order has made it clear that one must abide with the Constitution. We are prepared to give reasons as to why dissolution was illegal and unconstitutional when the court starts hearing on December 7, 2018,” he also said. He said yesterday’s victory was just one achievement and there are more to be achieved.

Also Mr. Wickremesinghe claimed that Parliament will be convened today.

“I would like to tell all government servants to follow the Constitution and would also like to tell the police that Speaker is in charge of security in the House and that they should adhere to instructions given by him.

MP Patali Champika Ranawaka said yesterday was an important day in the history of Sri Lanka. “We have managed to show that President’s power was limited. The Supreme Courts which we made independent has given a land mark order. We appeal to President not to be stubborn and get ready to accept a legitimate government,” he said.

MP Sujeewa Senasinghe said the UNP MPs who held ministerial portfolios will go back to their ministries today and resume duties. “We are now Ministers and we will resume duties today,” he said.