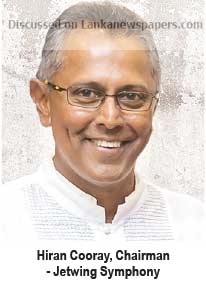 The company recorded a revenue of Rs. 520 million for the quarter ended 30th September 2018. Revenue for the first half of FY19 reached Rs. 819 million, an increase of 26% compared to the corresponding period for FY18.

The group reported a significant 286% EBIT growth (QoQ) with all operational properties declaring positive EBIT figures. EBIT growth was primarily fueled by an increase in the ARR across all operating hotels with Jetwing Kaduruketha reporting the largest increase of 82% (QoQ).

This is in line with the Group’s positioning of Jetwing Kaduruketha as a leading luxury eco-resort in Sri Lanka. Jetwing Surf and Jetwing Kaduruketha recorded profits for the quarter while the other properties performed below breakeven, primarily due to foreign exchange losses with the significant depreciation of the Rupee against the US Dollar.

All hotels have effectively controlled operational costs resulting in an operational profit before depreciation and finance costs of Rs. 194 million; an 81% increase from Q2 FY18. The group recorded a net loss of Rs. 81 million which was mainly due to foreign exchange losses amounting to Rs. 83 million for the quarter. Jetwing Surf, the Group’s newest venture recorded profit after tax of Rs. 6 million for the quarter ended 30th September 2018 despite being in operation for less than a year, further cementing Jetwing’s position as a celebrated hospitality provider.

Chairman of Jetwing Symphony, Hiran Cooray said, “We are extremely pleased with our team’s contribution to the strong performance for this quarter for Jetwing Symphony. The team’s ability to permeate the flavor of Sri Lankan hospitality enabled us to achieve significant growth, surpassing many milestones. With Sri Lanka’s destination marketing campaign to be launched shortly, we are confident in the long term growth prospect of the tourism industry in Sri Lanka, and we believe that we are well positioned to reap the benefits from the next growth wave in tourism. With an ever expanding portfolio and a focus on new initiatives for regional expansion, we believe that the Symphony group is firmly rooted in a foundation set for multi-dimensional growth.”