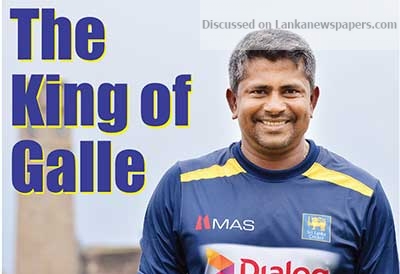 Sri Lankan cricketer Rangana Herath poses for photographs with Galle Fort clock tower as the backdrop on Sunday. The veteran will retire after the first Test against England here in Galle.

The iconic Galle International Stadium will put up a splendid show as veteran Rangana Herath brings the curtain down on his glorious career this week. The first Test match against England that gets underway on Tuesday will be the 40-year-old’s swansong and posters and billboards of the champion spinner are being put up all around the city to salute one of cricket’s all time greats. Galle has given superb sendoffs to several Sri Lankan greats and the southerners, known for their hospitality, will give Herath a rousing farewell as well.

It is only fitting that Herath chose Galle as the place to retire as it was here some of his most memorable performances were recorded.

The 2015 Test match against India are still etched in the memories of fans. The game lasted only four days and until the morning of day four India were winning the match. On the final day, Herath produced a magical spell taking seven wickets as India were bowled out for 112 runs as the hosts secured a come from behind 63 run win. It remains Sri Lanka’s last win against India.

It was also in Galle that Herath claimed a hat-trick against the Aussies as Sri Lanka went onto clean sweep the tourists 3-0.

Herath also needs one more wicket to complete 100 Test wickets at the iconic venue. Only two other bowlers – Muttiah Muralitharan and James Anderson – have taken hundred or more wickets at one venue.

In recent Tests against Australia and South Africa, Herath came up with dominating performances and the Sri Lankans will be hoping for a similar effort in the opening Test against England.

Although Herath’s bowling efforts have been celebrated, little credit has been given for his batting exploits having come up with notable cameos at number eight or at times with crucial contributions when sent as night watchman. Herath’s career best score of 80 not out also came in Galle in 2010 in Muttiah Muralitharan’s last Test match. He did have a chance to score a maiden Test hundred, but with time running out, Sri Lanka declared the innings.

Galle gets the best turnout for Test matches of all Sri Lankan grounds and the fans have an opportunity to give a grand send off to their hero.