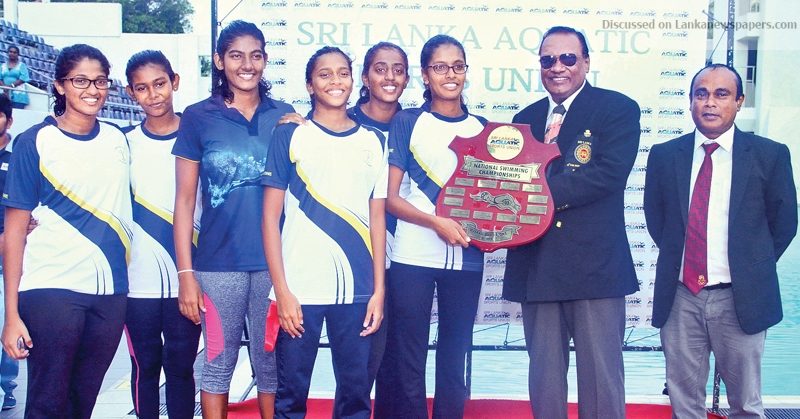 It was Killer Whale and Visakha who were in the driving seat from the start of the four-day competition dominating the nationals in the senior division.

Nalanda College and Sirimavo Bandaranaike Vidyalaya took the silverware in the Junior nationals category. Nalanda topped the boys table with 171 points while in second spot was St Peter’s College with 127.50 points, third place went to St Joseph’s College with 117 points.

Six new meet records were established on day four. Akithmi Wasalathanthri from Lyceum Wattala registered the first record in the junior category clocking 1:12.64 seconds in the U15 100m backstroke. The second record was established by Adithya Perera of De Mazenod College Kandana in the Boys U15 100 Backstroke clocking 1:04.11 seconds. Nisha Nilaweera of Stafford International established a record in the U15 50meters freestyle clocking 29.25 seconds.

Visakha Vidyalaya set two records and Lyceum Wattala one in the relay events of the senior group. Visakha registered a new meet record in the 200m freestyle relay clocking 1:56.62 seconds improving on their own record of 1:58.53 set in 2017.

Lyceum International School Wattala established a new record in the U15 girls 400 freestyle relay by clocking 4:35.13seconds and erasing the record of 4:38.26 seconds set by Visakhians in 2017.