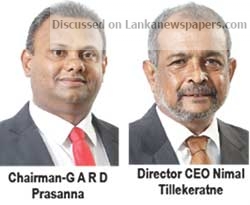 It adds: ‘For the nine months ended in September 30, 2018, the bank reported a profit after tax of Rs.1,080 million, up by a solid 18 percent from the same period in 2017. The net interest income grew by a strong 21% on a year-on-year (yoy) basis to Rs.4.43 billion supported by better margins recorded amid the rising cost of funds.

‘The net interest margin increased to 4.01% during this period from 3.61% in December 2017 as the bank continuously reviewed the pricing of its asset and liability portfolio and managed them efficiently. This improvement is a testament to the bank’s ability to recalibrate its asset portfolio from low yielding ones to high yielding ones in order to optimize the margins.

‘Higher credit costs set aside from profits on account of possible bad loans both during the quarter and during the nine months undermined the performance of the bank during this period.

‘The better top line performance during the nine months is also a reflection of relatively strong growth in loan book of over Rs. 15 billion which translates in to a robust growth of 13.5% in the loan book given the challenging market conditions prevailed during the period .The loan growth propelled the bank’s asset base to Rs.156.4 billion by the end of September, an increase of 13%.

“We recorded quite a solid growth in our loan book during the first nine months of 2018 amid the many headwinds we faced during this period. I consider this achievement noteworthy because we recorded it amid a moderation in sector loan growth and rising non-performing loans”, said Nimal Tillekeratne, Pan Asia Bank’s Director/ Chief Executive Officer.

‘Meanwhile despite the rising non-performing loans in the industry, Pan Asia Bank managed its gross non-performing ratio at 4.83% by the end of September from 4.36% in December 2017.

‘Containing sharp increase in the non-performing loan ratio is praiseworthy when whole the industry has been going through a quite steep deterioration in the asset quality.

‘The bank also increased its deposit base by Rs.9.1 billion anchoring much of the growth in the loans. Out of these total deposits, Current and Savings Account deposits – a key measure of the bank’s performance in low cost funds rose to 19.6% from just under 17.7% in December 2017 providing a much needed boost to the bank’s margins.