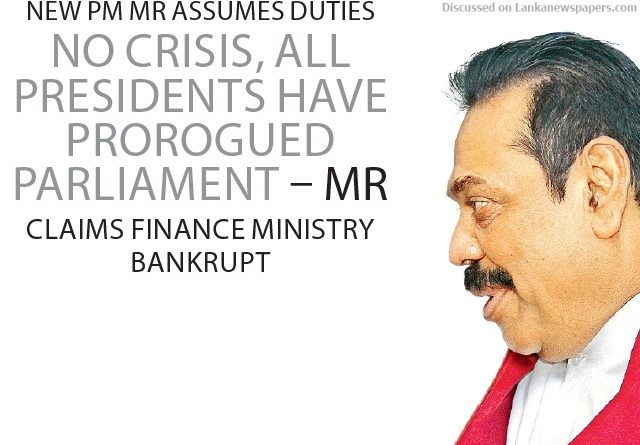 He was addressing the media yesterday (31) for the first time, after assuming duties as the Prime Minister and the Minister of Finance and Economic Affairs.

The official term for six PCs has come to an end during the tenure of the former Government and now Government administrative officers dictate the affairs of the PCs, he said. “We don’t have any type of a crisis in Sri Lanka, therefore shouting to the international community, claiming that we have a political crisis, will muddy the waters. The Parliament was suspended for only 11 days. Every Sri Lankan President has done exactly that including me and former President Ranasinghe Premadasa. It is not a threat to democracy,” said Rajapaksa.

“I have been away from the Ministry of Finance only for three years and 10 months. Now the Ministry is in a state of bankruptcy,” claimed the Premier.
During the tenure of the then Rajapaksa Government, Sri Lanka paid its debts on time, weathered the world economic crisis and the fuel crisis, the Prime Minister claimed.

For the past 25 years there were no Elections in the Northern Province of Sri Lanka or the Eastern Province, and the then Rajapaksa Government defeated the war and established democracy, the Prime Minister said.
Now people are suffering due to the unfair taxation and the fuel price skyrocketing on the 10th of every month, he added.

During the tenure of the new Government, a set of measures will be implemented to strengthen the agriculture sector of the country and an effective, fair, simple and transparent tax system will be established, added Rajapaksa.

“Our challenge is to build an independent national economy which will serve our own people. We will develop the nation’s national resources in an integrated and rational way, which will improve the living standards of our people,” said Rajapaksa.