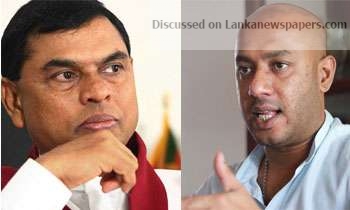 The duo had discussed at length the issues that had arisen between the two parties and how they could be sorted out.

Mr. Dissanayake reportedly told Mr. Rajapaksa that he was concerned about the problems facing the SLFP and its members after the new government came in.

Mr. Dissanayake had said that he would extend his support to bring about a strong government if their issues were resolved to which Mr. Rajapaksa had said he would personally act as a mediator to resolve those issues in discussion with Prime Minister Mahinda Rajapaksa.

The meeting had taken place at Mr. Dissanayake’s residence in Colombo and lasted for nearly two hours.