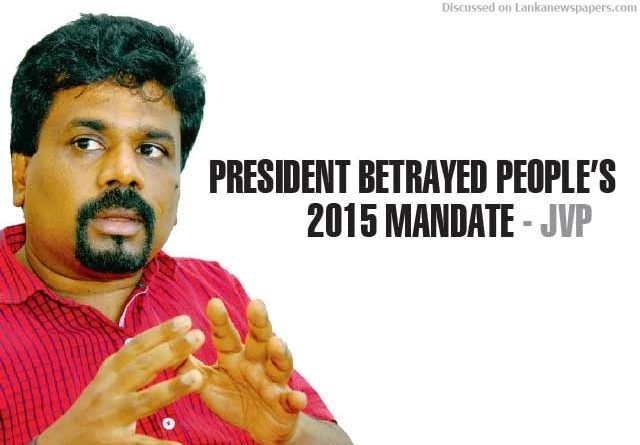 The Janatha Vimukthi Peramuna (JVP) said yesterday (27) that President Maithripala Sirisena cannot prorogue Parliament as he desires and that he has to summon Parliament immediately and provide an opportunity for the people’s representatives to discuss the political chaos he has created.

The JVP points out that the best solution to prevent certain destructive incidents from taking place in the country, at this moment, due to the political conspiracy carried out by the President and his discarding of the people’s opinion, is to summon the Parliament today (28) itself.

They also alleged that the President, on 26 October, totally betrayed the most extensive force the people built up to chase away a gang of thieves which ruled the country prior to 2015.

“From 2015, both, the President and Prime Minister Ranil Wickremesinghe have been engaged in betrayals from time to time. But 26 October, the President appointed former President Mahinda Rajapaksa as the Prime Minister and betrayed the 2015 people’s mandate in a most decisive way,” JVP Leader Anura Kumara Dissanayake stressed, at a Media briefing held in Colombo yesterday.

However, the JVP emphasized that they will not support any Party in Parliament.

He pointed out further that by proroguing the Parliament until 15 November, the President is attempting to make a success of the conspiracy he engaged in.

“What the President did was to take a decision like a thug and go and hide behind the door in fear, while proroguing the Parliament,” Dissanayake said.

“What is this nonsense the President has engaged in on 26 October – at about 7:00 p.m. with a gang of thieves surrounding him and swearing-in a new Prime Minister? His act is extremely unethical and undemocratic,” Dissanayake further alleged.

“Nevertheless, the President has decided on 26 October who should become the Prime Minister. This is opposed to the Constitution and against the law,” he also said.

Dissanayake further emphasized that, President Sirisena, who had stated that if he had been defeated at the 2015 Presidential Election, the former President would have killed him and his family, joining hands with Rajapaksa, was indeed amazing.