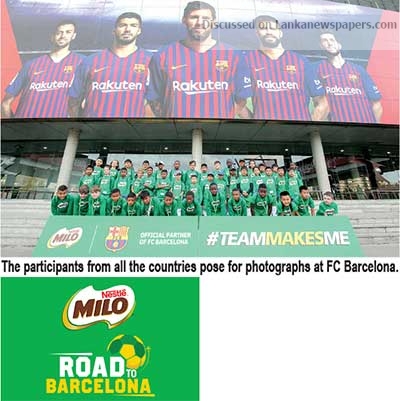 Milo’s Road to Barcelona, kicked off with an All-Island under-12 Football tournament, where six best performed players were selected after an extensive training for an all-expense paid trip to one of the leading football clubs in the world FC Barcelona.

Partnering with the Ministry of Education and the Schools’ Football Association, MILO’s ‘Road to Barcelona’, developed local football champions and gave them a wholesome experience of the international football arena.

The children were accompanied by a teacher, President of the Sri Lanka Schools Football Association (SLSFA) and an employee of Nestlé Lanka.

They departed the country on the 29th of September and experienced a three day tour in Barcelona where they attended a training in Camp Nou, the home stadium of FCB. The coaching camp included the Escola football clinic, technical skills development on the pitch at Camp Nou, classroom sessions, museum visit, city tour, interactions and discussions with FC Barcelona coaches and taking part in many fun filled games while getting along with team members of other participating Milo countries such as Trinidad & Tobago, Panama, Vietnam, Thailand, New Zealand, Indonesia, and Australia.

A Special note of thanks goes out to the pillars of strength behind the success story of these kids. Namely, the coaches of Sri Lanka Schools Football Association (SLSFA), Coaches of the winning schools for training the children and the parents of the children for being a constant source of support.