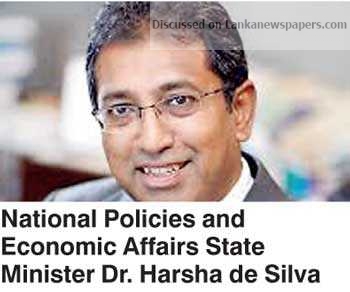 By Ashwin Hemmathagama – Our Lobby Correspondent

Dr. de Silva told Parliament the two state banks were stable and the President had called for a restructure in order to increase productivity.

“The two state banks, BoC and People’s Bank, are not unstable. The foreign investment has not gone out. What has gone out are the portfolio investments, which are 12.5% of the government securities we allow foreigners to invest. Many foreigners took advantage of the offer to invest in government securities when there was a wide gap in global interest rates,” he said.

“We received a considerable amount of those investments. That was the period we raised through international sovereign bonds, offering an 8.875% and 9% return. But now the LIBOR rates have gone up to 3%, forcing the investments to flow back from emerging markets. In Japan there was a negative interest rate. So this global phenomenon has no direct relations or responsibility with BoC or People’s Bank. The two banks have no relevance to this status. BoC and People’s Bank are not unstable.”

According to the State Minister, the President’s orders have led to some changes of top officials at the two banks.

“With the advice received from the President to restructure BoC and for People’s Bank to increase productivity, a program has already started. Discussions are also underway to decide the appointment of new directors to these state banks. New appointments have been made to the Board of Investment of Sri Lanka. The Chairman is Hemasiri Fernando and the other members are Dr. Harsha Subasinghe and Dr. Nihal Samarappuli. They were appointed by the President. It was learnt that the appointment of a Chairman for People’s Bank was underway. The delay is due to the process taken by the Central Bank’s Bank Supervision Division to see the suitability of the appointments made prior to approving the position.”

“The export processing zone under the BoI, 16 in number, is running at its full capacity. So we are looking to open three new zones in Hambantota, Millaniya and Bingiriya. The single window investment facilitation taskforce, which is a combination of 24 institutions, is set up to eradicate delays in starting projects and get the necessary approvals without a hassle. The current investors are encouraged by providing re-exports by providing necessary facilities. During the first half of 2018 the value of re-exports came to $ 25 million. Electricity and electronics, food processing, ship and boatbuilding, tourism, Information Technology, pharmaceutical manufacturing, petroleum products manufacturing, vehicles and parts related to service exports were the identified areas of the BoI’s ongoing programs. In an attempt to attract FDI, we have launched programs in Germany, Japan and Singapore,” he added.

Minister of Public Enterprise and Kandy City Development and Leader of the House of Parliament, Lakshman Kiriella, reminding the House about the questionable appointments to top positions at the two banks made during the time of the Rajapaksa administration, said: “BoC and People’s Bank have set records in profits. The Auditor General has not revealed any corruption and these two banks are functioning extremely well. Every three years we are making changes. But I must remind you of the fact that the previous government appointed astrologers and soothsayers as directors to these two state banks. All our nominated directors are crosschecked at the Central Bank before being appointed.”