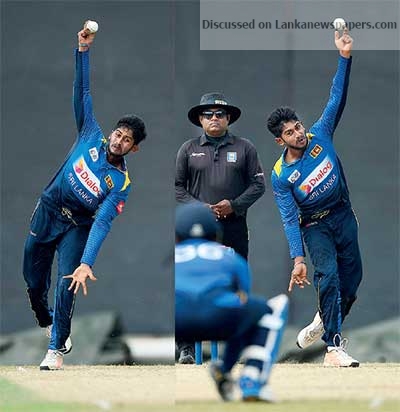 Former Sri Lanka Under-19 captain Kamindu Mendis, who showcased his ambidextrous skills during the warm-up game against England early this month at P. Sara Oval, is expected to play the one off T-20 International on Saturday.

Exactly a decade after Sri Lanka unleashed Ajantha Mendis to deadly effect humbling world’s best batsmen in the Asia Cup final, the selectors have thrown his namesake to the deep end. Twenty-year-old Kamindu Mendis is the talk of the town after being named in the squad for the one off T-20 International against England at RPS. He is expected to play the game on Saturday.

Much like Ajantha, Kamindu has played little domestic games before being rushed into the world stage. The 20-year-old is yet to make his First Class debut and has played a handful of limited overs games in the Inter-Provincial tournaments.

Ajantha’s specialty was his mystery as batsmen succumbed having failed terribly in the guessing game. Kamindu’s forte is that he is extremely skilful and has good leadership qualities.

John Buchanan, Australia’s most successful coach tried all his means to drill down to his players the importance of being ambidextrous. He didn’t proceed far and the most he got was getting some of his players to throw from both hands. His mantra didn’t go down too well with some of his charges.

In Kamindu Mendis, the Sri Lankans have found someone who bowls finger spin from both hands and more importantly does that with accuracy. His ability to take the ball away from both right-handers and left-handers could make him a much sought after player in the T-20 version of franchise cricket.

Kamindu is a product of Richmond College, Galle and represented Sri Lanka in two Under-19 World Cups, the last one as captain. He was only 15 when he first represented the country at Under-19 level and commentators were not short of words when he exhibited his rare skill with pinpoint accuracy.

He broke into the senior side following his excellent effort in the warm-up game against England at P. Sara Oval.

In a rain shortened game, Kamindu sent down eight economical overs without taking a wicket but it was his batting that impressed as he posted 61 runs at number six against a good attack – Mark Wood, Chris Woakes, Ben Stokes, Moeen Ali and Adil Rashid.

After Sri Lanka’s huge win in the fifth ODI on Tuesday, fans will be expecting another impressive effort in tomorrow’s game. All eyes will be on Kamindu. Saturday will be a big day for the little man.