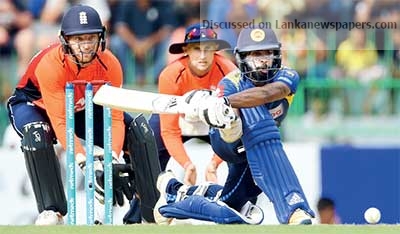 Sri Lankan cricketer Niroshan Dickwella (R) is watched by England wicketkeeper Jos Buttler (L) as he plays a shot during the fifth and final one day international (ODI) cricket match between Sri Lanka and England at the R. Peremadasa Stadium in Colombo on October 23, 2018. ISHARA S. KODIKARA / AFP

Sri Lanka recorded their biggest win against England in one-dayers completing a 219 run triumph in the fifth ODI at RPS last night despite the game being of little interest. The hosts came into the final game of the series having lost the series and it was a matter of them playing for pride and more importantly getting some momentum behind with the World Cup just a handful of ODIs away.

England were 132 for nine in the 27th over chasing 367 runs to win when rain came down and prevented further play. Play didn’t resume and that meant Sri Lanka were handed a huge 219 run win. It was England’s heaviest defeat ever in ODIs with their previous worst defeat being the 165 run loss to West Indies in Jamaica in 1994. It was Sri Lanka’s fourth biggest win in history.

England did a few changes to the side and even rested captain Eoin Morgan. Sri Lanka cashed in from the opportunity coming up with a clinical performance committing very few errors. They posted 366 for six batting first, the second highest ODI total at RPS. All top four batsmen scored half-centuries with openers Niroshan Dickwella (95 in 97 balls) and Sadeera Samarawickrama (54 in 48 balls) adding 137 runs for the first wicket.

Off-spinner Moeen Ali dismissed both batsmen with Dickwella unlucky to miss a hundred by five runs. The Sri Lankans have not got any ODIs remaining this year and that means they end 2018 with none of their batsmen having scored a century in one-dayers. That gives an indication how much they have struggled in white ball cricket in recent times.

Skipper Dinesh Chandimal put to rest doubts about his strike rate scoring a rapid 80 off just 74 deliveries with six fours and two sixes. It was Chandimal’s first half-century in ODIs in 15 months after 17 innings. There was a bit of improvisation by Chandimal as he reverse swept the spinners and even attempted a couple of scoop shots off the seamers although he failed to connect.

But the biggest satisfaction yesterday was Kusal Mendis coming to form. The 23-year-old had collected three ducks in a row and only managed five runs in his last game at Pallekele but yesterday he looked to be in great touch clearing the boundary with little trouble. Mendis’ half-century came in only 30 balls.

The seamers were on the money for Sri Lanka as Kasun Rajitha went through the defenses of Jason Roy in the first over of the innings while Dushamntha Chameera struck twice in the second over. First he had Alex Hales caught by Kusal Mendis at first slip for a duck and then stand-in captain Jos Buttler was caught by wicketkeeper Dickwella two balls later for a duck.

England were 28 for four whereas Sri Lanka had been 328 for four and that basically summed up the story as to who dominated the game. The win, however, came way too late for the Sri Lankans. Their fans sent a strong message too with RPS literally empty. Just a few hundred fans watched the game and they too were some school children and England supporters.