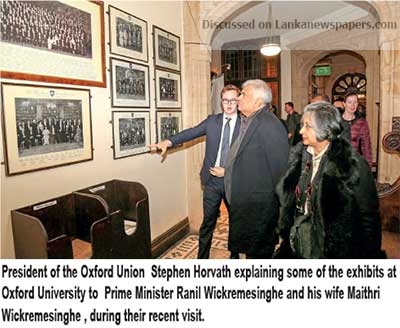 Prime Minister Ranil Wickremesinghe says that a Truth and Justice Commission will be established early next year, as a follow up to the Missing Persons Commission.

When told that normalcy had not returned nearly a decade after the war with the LTTE had ended, the PM said that as a co-sponsor of the UNHRC Resolution ‘Promoting Reconciliation, Accountability and Human Rrghts in Sri Lanka’, along with the US Britain, Montenegro and Macedonia in September 2015, Sri Lanka had set up a Missing Persons Commission and a Truth and Justice Commission was slated for enactment early next year.

The strength of the army had been reduced and Sri Lankan military personnel were now conducting peace keeping operations in Mali, PM Wickremesinghe noted, adding that the reconciliation and rehabilitation process was by and large progressing satisfactorily.

He admitted that some small gangs were operating in Jaffna, but the Tamils did not have an issue with the Army.

A majority of the civilian lands that the military had occupied during the war, out of national security considerations had been returned and India was developing the Kankesanthurai Harbour, the Prime Minister added.

He stressed that there was no need for foreign intervention in Sri Lanka to investigate allegations of war crimes against the security forces and the LTTE. “Our government has since assuming office on January 15, 2009, restored democracy, the independence of public institutions including the judiciary and police, addressed to a large extent reconciliation issues, rehabilitation of the war affected.”

Foreign assistance was welcome, but it would be better for the war crimes accusations to be investigated by the Sri Lankan judiciary, Wickremesinghe said. “Anyone is free to come and observe the proceedings. In keeping with UN resolutions, we report to Geneva of the progress made on transitional justice, reconciliation, reparations, rehabilitation etc. Our next report is due in March 2019.”

The Prime Minister also visited the London Stock Exchange to launch the days trading and promote investments in Sri Lanka.

A representative gathering was shown an impressive presentation on the opportunities available in Sri Lanka.

The Sirisena- Wickremesinghe governments “Vision 2025 ” programme, which includes increasing Foreign Direct Investments to USD 5 billion per year, doubling exports to USD 20 billion per year, raising per capita income to USD 5,000, creation of one million jobs, Sustainable Livelihoods etc., were explained in detail to the audience.