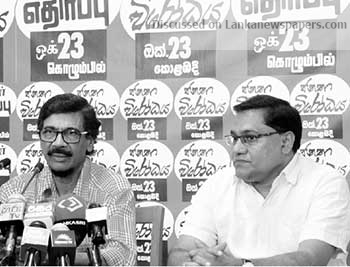 The JVP yesterday said its protest campaign scheduled to commence shortly could continue until the government was ousted.

Addressing the media at the party headquarters in Pelawatte, JVP General Secretary Tilvin Silva said that the government was incapable of ruling the country. “The UNP leader who used to praise the open economic policies now talks of protectionist policies. The government is hell bent on promoting its FTA with Singapore.”

Sixteen MPs are in a dilemma. They can neither go back to Maithripala Sirisena nor join the Rajapaksa group. They, too, promote the idea of caretaker government for they are eyeing ministerial portfolios.”

“None of these groups has a clear vision as to how to steer the county out of this mess. People should join forces with the JVP to send this government home. We have held discussions with various organisations including trade unions, farmers and others. They will join our protest campaign on Tuesday. We are planning to continue with the agitation campaign till we see a regime change.”